Dave Barry, Roger Ebert and me

What do Dave Barry, Roger Ebert and I have in common?

Honestly, nothing. Two great U.S. writing luminaries and a wannabe.

Barry is the best American newspaper humor columnist of the past half century. Ebert, who died recently, was one of America’s most beloved cultural writers.

They both helped me along without realizing it. In 2000, Barry ran for U.S. President, and I ran separately for vice president as the “Yankee Cowboy.” Dave Astor in Editor & Publisher magazine did a story about us. (We lost, but you knew that.)

A couple of years ago, Ebert picked up a story of mine about a man who charged a woman with assault after she touched him on the shoulder and warned him to turn off his cell phone in a movie theater. He posted it on his popular Facebook page and, with Matt Drudge, propelled that story to the #1 most-read online story of the year for my old paper.

This month, though, the three of us shared, along with a lot of other talented writers, column writing awards at the 37th annual National Society of Newspaper Columnists conference. 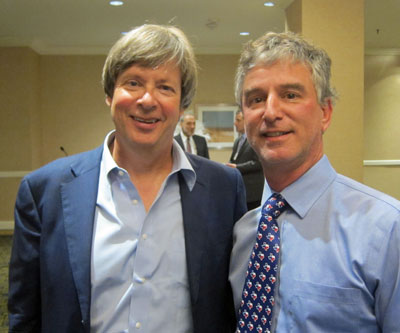 I placed second in the general-interest column contest for large U.S. newspapers. Third time in four years I’ve been a finalist. I can’t seem to win, but judges like The Watchdog investigative column that exposes wrongdoing and right-doing in businesses and government.

The 2013 judge explained, “In his Watchdog column, Dave displays courage and a willingness to challenge injustice and illogic wherever he finds it. He also gets positive results for others, which is always a hallmark of everyone who expresses their opinion for a living. And his work shows a willingness to even challenge himself and his own fallibility. He writes very well and fulfills his mission in a way deserving of national recognition. Were but more columnists blessed with his sense of outrage over even small injustices.”

My friend Tom Rademacher, a beautiful writer from the Grand Rapids (Mich.) Press won, and sports columnist Rick Telander from the Chicago Sun-Times was third.

This prize comes for my 2012 work at the Fort Worth Star-Telegram, which laid me off in January 2013. I can’t even begin to imagine the frustration I would feel if when receiving this nice honor I was an ex-columnnist, not by choice. Fortunately, I’ve been writing The Watchdog column in The Dallas Morning News since May 2013.

Thanks to The Dallas Morning News for giving a second life to The Watchdog. This honor caps off a wonderful half year of honors and awards.