Byron Nelson and Me: He was a superstar who didn’t act like one

In my recent Sunday column in The Dallas Morning News, I told the story of how golfing legend Byron Nelson’s widow fought a developer who built a 250-unit apartment complex in Trophy Club and named it The Byron. Without permission.

Peggy was driving by a few weeks ago and noticed a sign that said “Byron.” She went home, searched the web and saw that that the development had just opened.

She raised hell over it, and if you’d like to know how it ended (slow tease), then don’t miss my story: “For Byron Nelson's widow, he husband's name on an apartment complex was a jolt. No one asked her.”

Even though the developer tried to make it sound in an interview with me that the name Byron was a coincidence, I wasn’t buying. Byron Nelson High School is nearby, and Byron Nelson’s Fairway Ranch, where he lived for 60 years, is also nearby.

Left unsaid in the story were my own experiences with Mr. Nelson. I hope you don’t mind if I share a few here.

If you’re not a golf fan, then you may not know that Mr. Nelson was one of the greatest golfers who ever lived. And after winning a record-setting 11 straight tournaments in 1945 (Tiger only has 7), he moved to his Roanoke ranch, retired, and spent the rest of his life as an exemplary human being, serving God, his family and friends, and the community.

I first met him in 1994 when he released a book, and I asked to interview him. He invited me to the Las Colinas golf club where his PGA tournament (AT&T Byron Nelson) was played every year while he was alive. We met for lunch.

I remember two things about that interview: 1) his trademark porkpie hat hung nearby on a hat rack, so symbolic of his well-known persona, and 2) he insisted on paying for lunch. Although I have a firm rule about turning down all gifts when I’m writing about someone, I didn’t argue here. It didn’t seem right to argue with Byron Nelson. It was his club, and as far as he was concerned, I was his guest.

I like to say that if Babe Ruth didn’t overeat and overdrink and was a church-going man, he could have had the longevity of a Byron Nelson. But there was only one Byron, a superstar who didn’t act like one. 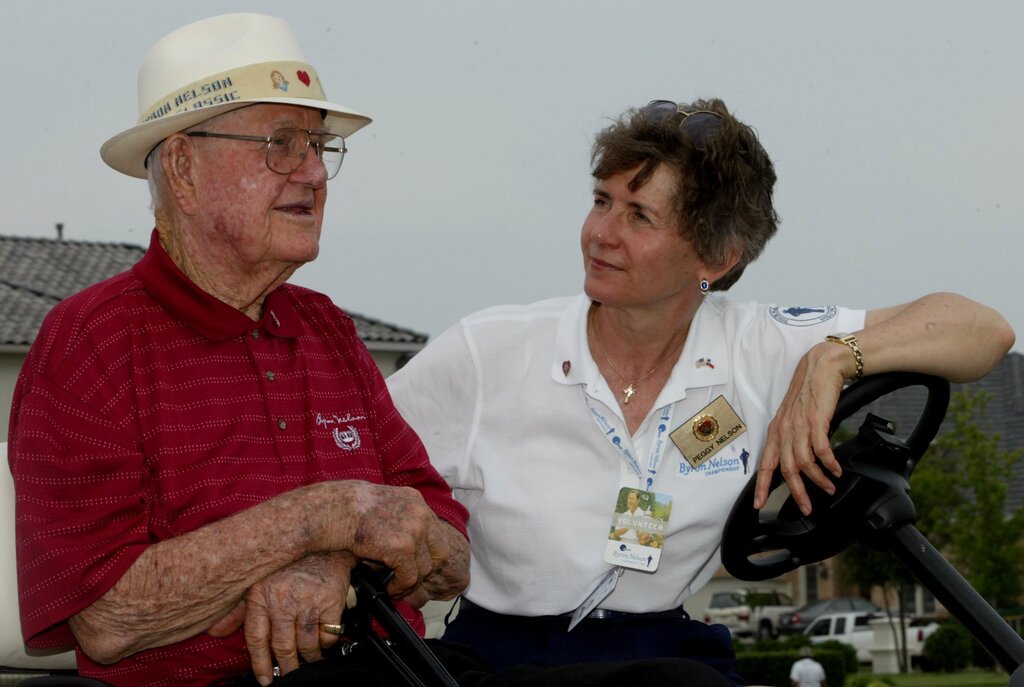 One time, in 1997, the local chamber of commerce hosted a birthday party for him. I planned to cover it and called Byron and Peggy to ask if I could ride with them in the back seat of their car to and from the banquet.

Puzzled, they asked why.

“Then I can get a scene or two of you too talking for my column,” I explained. (That’s an old writer’s trick to bring the reader into the center of the action.)

They agreed, and I was able to begin my story this way:

Byron Nelson awoke Tuesday morning on his Roanoke ranch to his favorite breakfast of waffles, cooked by his wife, Peggy. It was Lord Nelson’s 85th birthday, and his many good friends began calling with affectionate wishes.
The great golfer took at least three dozen congratulatory calls before he and Peggy left for his birthday bash in Trophy Club.
In the car going to the party, Peggy remarked that sometimes her husband feels as if he doesn’t deserve the adulation.
“He says, ‘I’m not good enough,’” she said.
What followed proved otherwise.

Nelson was beloved that night by his neighbors, who spoke, one after another, about his stellar humanity and how proud they were to be his friend and neighbor.

When it was his turn to speak, he explained, “The only way you can get to heaven is to live right, do right, and be a very nice person.”

Thanks to my ride back with them in the car, I was able to end the story this way:

For him, a man with no ego, that was a revealing admission. That’s why I asked to sit in the backseat.

Enjoy my story: “For Byron Nelson's widow, he husband's name on an apartment complex was a jolt. No one asked her.” Now, you know the rest of it.

(This story originally appeared in Dave Lieber's Watchdog Nation weekly newsletter. You can sign up for it here):  https://dallasnews.activehosted.com/f/90