What happens when the worst 10 minutes of your life go viral? Find out in his new Texas thriller.

Dave Lieber, The Watchdog columnist at the Fort Worth Star-Telegram, has been chasing after people in his newspaper stories and columns for more than 30 years. For a dozen of those years, he chased after one police department in particular for all manner of wrongdoing. Then one day that police department went chasing after him. 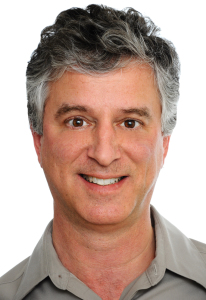 Mr. Lieber recently spoke about the experience and the writing of his new book. Bad Dad (192 pages, hardcover, $23) is a true-story thriller, a parenting book about parental responsibility, child-rearing practices, child discipline and how society defines bad parenting. It's also about small-town corruption and the moral consequences of being a public figure.

Q. What made you write a book about the worst 10 minutes of your life?

A.  As a professional speaker and writer, I know that it's not what happens to me that matters, but what happens to your audience. In today's world, anybody at any time can fall victim to one small incident getting blown out of proportion. How often does Fox News show a mother spanking a child, as captured on a Wal-Mart video camera? I'd say every other week. Something like this happened to me. It could happen to you or someone in your family, too. We're talking here about maintaining good behavior in public and, of course, good parenting skills.

A. I took my 11-year-old son to McDonalds for breakfast. He was ready to leave before I was through eating and reading the paper. He wouldn't settle down and kept insisting, “Let's go!” I got so fed up that I told him that if he didn't wait 'til I was done, he could walk the 7/10th of a mile home alone and think about what he did. He didn't listen, so I left him at the restaurant. Ten minutes later, when I doubled back to check on him, there were two police cars waiting. Someone had called 911.

Dave Lieber's newest book is his best writing yet. BadDadBook.com

Q. What was your relationship with this police department?

A. For a dozen years, before I started The Watchdog column in 2005, I covered 25 cities and school districts in North Texas. One of the police departments is situated across the city border in Watauga, Texas, a few blocks from where I live in Fort Worth. This particular department had no end of problems, from police chiefs on down. Thanks to the wonderful Texas Public Information Act, which I use all the time in my reporting, I was able to document one terrible incident after another in this department. Nobody ever disputed the facts. Watauga mayors, city council members and firefighters were also subjects of my columns. In Texas, people pay attention when they are given the straight, behind-the-scenes facts about what their government is doing. Powerful people lost jobs and and more. Then I came close to losing my job and more because of a “mistake” I made.

Q. What happened with those two Watauga police cars?

A. The officers took witness statements, lectured me and let me go home. Then they called Child Protective Services, which visited my house. By then, I'd already shared what happened in my newspaper column. I learn from my mistakes as well as the mistakes of others in that watchdog column. Shockingly to me and a lot of others, I was eventually arrested and charged with two felony counts of abandonment and endangerment. Suddenly, my family, career and reputation hung by a thread. My column was suspended. My mug shot was everywhere. From around the nation and even the world, TV newscasters, radio talk shows, newspapers and bloggers weighed in with their opinions. Inside Edition and ABC News called. Fox News national had a mini mock-trial about me. It was a small incident that quickly spiraled out of control. I was the guy in an Alfred Hitchcock movie.

Q. How did you tell the story in the book?

A. Like a movie. I unfold the story through scene-by-scene construction, dialogue in full and other writing techniques favored by some of my writing mentors, the “new journalists” such as Gay Talese, Tom Wolfe, Jimmy Breslin and Pete Hamill. I use literary techniques to take the reader back decades in time. How do past events lead to a sudden outburst like that (by me, as well as by my son)? What happens in a person's childhood that sets the stage for later bad moments in adulthood?

Q. What about the police angle?

A. That, of course, gives the story its driving dramatic arc. I point out early on that a city police officer who stopped me once for speeding and let me go with a warning was later berated by the chief: “You never let Dave Lieber go with only a warning.” That thinking kind of sets the stage for what happened.

Q. Do you think this would have happened to you in other towns in North Texas?

A. Well, I'm inclined to believed I'd have gotten a lecture, but not the threat of prison time. Over the decade, I've written a lot of tough stories about a lot of police departments, but I've also worked closely with police departments throughout Texas on community projects such as National Night Out, Citizens on Patrol and Texas TLOFT (Texans Lookin' Out for Texans). I speak at their events, enroll in their citizens police academy classes and support police whenever support is required. They are my sources, my readers and sometimes, my friends. I'm certainly not anti-police. I supported some Watauga police officers in print whose treatment by their superiors, I thought, was unjust.

Q. It sounds like a unique Texas thriller, but three years later, how are things between you and your son?

A. He's 14 now, and we have our challenges like everybody else. But we continually work through them, learn and grow together. I'm grateful to Austin because not only did he give me permission to share this story, he also helped me create the book trailer video. He did a great job. See for yourself. Watch Bad Dad Book trailer by Dave Lieber here.

Q.  Before we go, what was writing the book like?

A. Good question. It was brutal. Or I should say brutally honest, which is never easy, but that's how a book like this should be. There was no sugar coating. My focus was this: how do you take this story and craft it so readers stay on the edge of their seats? How do you make it come to life so they feel as if they  walking through these experiences with us? And most important, so they can see elements of their own family experiences within mine. My challenge was to write this so people can't put it down. I've been told I succeeded, and that's through blood, sweat and, yeah, tears. I'd write, come downstairs and my wife Karen would ask, “Have you been crying?” I called on every self-disciplining writer trick I knew. Butt in the chair. Keep writing. Rewrite and rewrite some more. But it was worth it. Bad Dad will help people everywhere remember the new rule in today's modern society: “Live your life as if you're always on camera. Don't do anything you don't want seen by millions.” 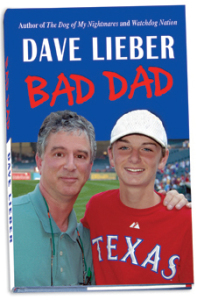 He is The Watchdog columnist at the Fort Worth Star-Telegram. His Facebook page is FB.com/Dave.Lieber. On Twitter, go to @DaveLieber.

The father of three children, Dave lives with his wife Karen and their youngest son, Austin, in Fort Worth, Texas.

Lieber is co-founder of one of North Texas' largest children's charities, Summer Santa, which provides help to thousands of children in need each year through an all-volunteer charity with no physical office or paid staff. For this he won the Will Rogers Humanitarian Award as the newspaper columnist who makes positive contributions to his community.

Bad Dad is Lieber's latest book. His other books include Dave Lieber's Watchdog Nation: Bite Back When Businesses and Scammers Do You Wrong and The Dog of My Nightmares: Stories by Texas Columnist Dave Lieber. Visit the Yankee Cowboy Store to find all of his books and more.