Farewell Gary Blagg: May one of Grapevine, Texas’ most colorful characters R.I.P.

Gary Blagg passed away on April 2, 2020 at age 79 from a heart attack. Gary was a most unusual fun and grateful man. Here's a story newspaper columnist Dave Lieber wrote about him for the Fort Worth Star-Telegram in October 2002.

We were sitting in the French bakery on Main Street one recent afternoon drinking coffee and doing what you do on a lazy afternoon in Grapevine. Gary Blagg and I were gossiping about what everyone else in town was doing, when Gary began talking about himself.

“You know, I'm getting inducted into the Grapevine High School Hall of Fame,” he said excitedly.

“Yeah, can you believe that?”

The honor stems from his service to the community. After graduating from Grapevine High in 1958, Gary never went to college. Heck, he barely made it through high school. But if high school is supposed to prepare you for a successful career in business and for volunteer service to your community, then Gary Blagg is an honor student. He excelled at both.

“Can you believe it?” he asked between sips of his coffee. “Take an old country boy who sells tires and put him in the hall of fame?”

Gary Blagg's love affair with his hometown is one more Grapevine success story. Exactly 50 years ago, the townsfolk did something wonderful for him, and he never forgot. He has spent the last half-century trying to repay them. 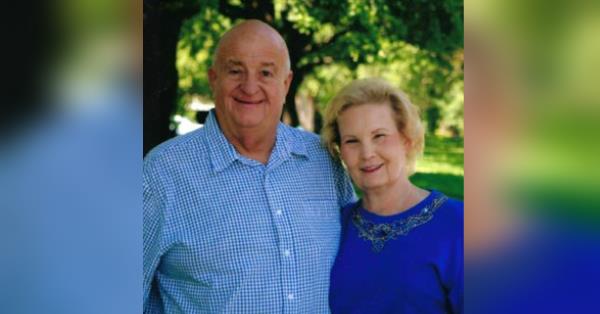 In 1952, his grandmother's house on Smith Street was destroyed in a fire. Two years before, when Gary was 10, his father had died. The family had no place else to live. But the townsfolk rallied around them. Neighbors donated cows, pigs, chickens and bales of cotton and hay along with clothing and food. They found the family a new place to stay and held fund-raisers and auctions that raised $5,000. Gary never forgot.

After he and his wife, Wanda, opened their tire store on Main Street in 1986, Gary tried to put back as much into the city as he took out. He served on every board imaginable and donated to most charities. Gov. George W. Bush appointed him to serve on a state board that developed licensing standards for tradesmen. But his deepest affection was saved for the Grapevine-Colleyville school district, especially his alma mater.

For years, he has visited his high school and given his stay-in-school speech to the students, but his is a little different. Gary puts a ponytail wig atop his bald head and starts singing rap music, which gets the attention of the teen-agers. Gary tells them, “My body is 62, but my brain is 16.”

You get a hint at what a poor student this future hall-of-famer was when you read Gary's 1958 yearbook. Superintendent W.F. Cannon wrote the following: “To hot-rodder, actor, lover, executive, office-boy and student (using the word loosely). You are gradually gaining control of yourself. Try hard to make us proud of you. You can if you so desire. Mr. Cannon.”

The superintendent was being charitable. After our coffee session, I started asking around town about Gary. His nickname in high school was Poo Doo, which is what his grandfather called him. Poo Doo was the right kind of name. Gary was a chubby little guy who wore glasses with thick black frames.

“Gary was always having problems with the girls,” remembers his cousin, Sue Franks of Southlake. “Once, two football players told him that when girls said no, they didn't mean no. They said, ‘Just take her to the lake and remember what we said.' The next time we all saw Gary after that, his glasses were all taped up, and he had a black eye. He said, ‘I don't think those football players told me the truth.' ”

Franks takes credit for helping Gary through school. She told me, “I wrote every theme he ever turned in. If he turned something in, I wrote it.”

During his senior year, Gary climbed the Grapevine water tower in the middle of the night with his best friend, Rafael Ward, and painted “Seniors '58.” But when it came time to come down, Gary froze and wouldn't go down the ladder. The Fire Department and the police were there, helping, but he didn't make it down until sunup.

His friend, future Grapevine Fire Chief Billy Powers, supposedly taught Gary how to drive, but when I asked Powers about it, he denied it, saying, “No! Nobody could teach him how to drive as bad and as fast as he does.”

At 62, Gary is still Grapevine's best-known street racer. He drives a 1993 Chevrolet 454SS pickup, which is now on its fourth engine. When I asked Gary how many traffic tickets he has received, he replied, “I could not count them. But 1999 was my worst year. I got 22.”

He added, “If I get some kid at a red light and blow him away, I'm in hog heaven.”

I had heard that Gary surprised Kevin Singer, the Grapevine-Colleyville superintendent, with an unexpected trip to hog heaven.

Singer told me, “He asked me to go meet him for lunch one day, and he said, ‘I'll pick you up at the administration building and we'll go together.' He picked me up in his big truck, and at a traffic light, he kinda gunned it a little bit.”

Gary confirmed the story. “I looked over at Dr. Singer. His eyes were big and round like silver dollars. I don't think Dr. Singer will ride with me anymore.”

Singer said, “It doesn't disqualify him in my mind for the hall of fame. He's a good supporter of the district. But next time, I'll drive.”

At his induction ceremony Friday, Gary thanked Cannon for inspiring him, Powers for teaching him to drive, Ward for helping him climb down the water tower and Franks for writing his school papers. He saved special thanks for his wife, whom he said he has been married to for “39 years, 7 months and 18 days.”

Then in front of several hundred people in the school library, he looked over at Wanda and shouted triumphantly, “We made it!” You just knew that old superintendent Cannon would be proud.