Jeanne Robertson Gets Discovered by America

When I saw Jeanne Robertson at the National Speakers Association convention in Orlando, I complimented her on the seven million views she earned on her YouTube channel, JeanneRobertson.

By the time you read this and check for yourself, her view count could be above 10 million.

I wish I could buy stock in her. 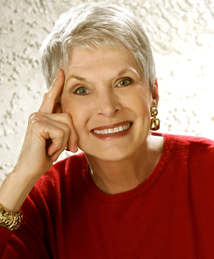 Did the next best thing, though: bought tickets for her Sept. 17 appearance at Lakewood Theater in Dallas. (Show is called: JUST JEANNE! “Comedy with Class”)

Jeanne, a former president of the National Speakers Association in the mid 1980s, is a genuine YouTube superstar. Safe to say that the former Miss North Carolina is bigger than ever — and not because of her 6-foot-2 inch frame.

What's her secret? It's obvious. There's one distinguishing factor. Yes, she's funny. Yes, her delivery is exquisite. Yes, she looks wonderful. But what makes her, in my mind, a 10-million-views YouTube performer is this: Jeanne Robertson is one of the world's best storytellers.

Despite what you've heard about cat videos and YouTube, the website is also an international referendum on what's outstanding and what is not. Cream rises to the top. Jeanne's stories are perfectly crafted, perfectly told and perfectly wonderful.

The beauty of this is that there's room for all of us to be world-class storytellers. If you learn by watching the great ones and want to be the next Jeanne Robertson, this column is designed to help you, the speaker, get there.

Then, after all the laughter, pull yourself together and come back here so we can brainstorm about what she does. Here's the video:

Here's what I saw:

QUIRKY CHARACTERS: She quickly introduces two comical sidekick characters in her story (so she doesn't carry the burden herself). Leftbrain is her husband, Jerry, although his real name is not used. And the “young woman” whose character comes through not in her manner or style of dress (which is never shared) but through her direct dialogue.

STRONG IMAGERY: Rather than say “Can you believe this young person?” she crafts a memorable image for her reaction to the suggestion that she and her husband go bungee jumping: “Have you ever wanted to take a young person's face in your hands and say lovingly, ‘Are you in there?' ”

What makes the line work? 1) Unexpected use of the word “lovingly.” 2) The look of disbelief in Jeanne's eyes when she says it. 3) And the way she leaves a vivid image in your mind of her actually doing that, which, in this case, she didn't.

CHARACTER SHOWN IN FEW WORDS: The best storytellers describe character traits in few words, but with strong images. She describes Jerry as “thin, solid white hair, also thin.” Six words. That's all she needs. She describes herself as “also 62, not as thin as I once was, and my hair is Clairol Tweed No.14.” Using the actual product name at the end of the line gives a power-punch comedic ending, too.

STORY THEATER: Jeanne incorporates Doug Stevenson's Story Theater principles. When she talks to Leftbrain, she turns to her right and appears to be looking into her husband's eyes. When he talks back, she takes two steps to her right, then turns to her left to look back. When she plays narrator, she faces the audience.

COUPLETS: Her humor is offered up as Shakespearean couplets — two lines working as a unit. For example, when she hears that people with hearing aids and false teeth remove these items before bungee jumping, her reaction couplet is:

“How many people do you have that come out there — and, before they jump, first have to put their teeth and hearing aid in? What do you say? ‘Put your three-prong walker against a tree.' ”

EVERY WORD COUNTS: Each line in these six minutes is crafted for its rhythm and its impression. And although the goal is to make each sentence as short as possible, sometimes extra words can be added to help create a tone that is subtle, yet funny and memorable. Here's an example:

One of her best lines, judging from audience reaction, comes when she muses about what effect hanging upside down would have on her 62-year-old body.

“With all the sagging areas on our bodies, if we can hang there long enough naked, we might can knock a few things back in place.”

She uses “might can” when it should be either “might” or “can.” But together she has fused a country expression that puts her with her audience rather than above it. And it's funny.

ENDING BIG: The denouement — or resolution of a story where loose ends are tied up — is the part that most speakers forget. The story is already over, but Jeanne's final line leaves the audience gasping for air. It sounds effortless, but sentences like this often take a lot of work:

“Right there, right there,” she repeats like closing musical notes, “I laughed so hard my water broke and I wasn't even pregnant.”

Right there, right there, Jeanne shows how to end a YouTube video that, itself, has collected more than 2 million views. One killer line. 16 words of finality. It's unexpected… vivid…. punchy… ironic.

At least 9 million people, soon to be 10, love this kind of stuff.

Dave Lieber, a newspaper columnist, humorist, public speaker, investigator and fan of Jeanne Robertson, is a member of NSA/North Texas. This feature, “you, the speaker,” was originally written for the September 2010 chapter e-newsletter. Find Dave on Twitter @DaveLieber.