Note: On Memorial Day 2012, we reprint this newspaper column by Dave Lieber which first appeared in the Fort Worth Star-Telegram in April 2003.

One day, nine years ago, I cleared my throat, straightened my hair and knocked on the big wooden door of the stone house in Keller.

I had been dating Karen Pasciutti for two weeks. I had met her two children. I had met – with regrets – her Psycho Dog. I had even met Karen's mother, Joan. I had met everyone except the man of this house, Karen's father. But it was Karen's birthday, and her parents had invited me to the family celebration.

There was a lot of pressure. Karen had told her parents that after only two weeks of dating me she knew this was the real deal.

So I knocked on the door and held my breath.

And this fellow opened the door.

He welcomed me inside his home.

He looked me dead in the eye and said something I'll never forget. He knew I was Jewish, and he said, “Listen, I hope you don't mind, but we eat pork here.”

He said, “Good, because we're having ribs tonight, and they say I make the best ribs.”

But he wasn't done.

“Listen, there's something else,” he said. “I know you're from New York, and I'm from New York, too. But that was a long time ago. And I want you to know that we're Republicans in this household.”

You could tell he couldn't wait to tell me that.

“Good,” he said. “Now that you understand. We eat pork, and we're Republicans. So if you have a problem with that, just get over it!”

And then he laughed that big John Pasciutti laugh that you could hear all the way down the street.

And you know, I did get over it.

I got over it because I didn't want to miss the fun. 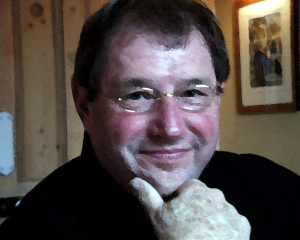 And I got over it because I soon learned that I had just been granted the privilege of a lifetime – an opportunity to get to know and to love retired Air Force Maj. John L. Pasciutti, who would become one of the most important influences of my life.

I have changed so much in these past years, and probably the biggest reason is that I fell under the influence of this charismatic, principled, idealistic and wonderful man. My father-in-law taught me about American ideals and notions that previously were only book concepts. Dad was a career fighter pilot who had quit college to join Air Force cadet school. In hours of discussions and also in a life that he lived by example, he taught me the meaning of duty, honor and country.

I now regret that I never told Dad of the influence he had on me. But it's too late. He died 10 days ago at age 65.

On Monday, after I delivered the eulogy at his funeral, after the bagpiper played Amazing Grace, after Dad's flag-draped casket was carried out to a waiting hearse, we traveled to Dallas-Fort Worth National Cemetery. There, Dad's body joined the waves of military gravesites marked by unending rows of tombstones dotting the hillsides. 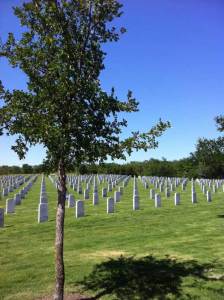 We witnessed the missing-man formation, the military flyover in which one jet trails off from the others. We watched the somber folding of the flag. And we sobbed softly during the presentation of the flag to Joan Pasciutti, my mother-in-law. She accepted this final gift from her husband with a look of resignation that showed she always knew this dark moment was coming.

All those years during which Dad flew the skies and demonstrated his love of duty, honor and country made this moment a part of our family's inevitable destiny.

During the more than 20 years Dad and Mom served in the Air Force together, Mom always watched the chaplain's van slowly cruising up and down her neighborhood streets. She prayed that it would never stop at their house.

Monday afternoon, after the gun salute, that flag finally came her way. An Air Force officer, clutching the flag near his heart, slowly marched toward her. He gently knelt at her feet, looked into her eyes and whispered the following:

“On behalf of the president of the United States, the Department of the Air Force and a grateful nation, it is a privilege and my honor to offer this flag for the faithful and dedicated service of your loved one. The personal sacrifices that he made and his contributions to the armed forces in times of peace and war helped to ensure freedom for America and for the world.”

Someone had tucked three bullet casings from the gun salute inside a fold of the flag. Those three casings represent duty, honor and country.

Until the day when I first knocked on the big door of that Keller home, those were concepts that I valued but never truly understood. In the years since, retired Air Force Maj. John L. Pasciutti – Dad – brought them to life for me. And in doing so, he changed me. He helped me become a better man, a better father, a better writer and a better American. 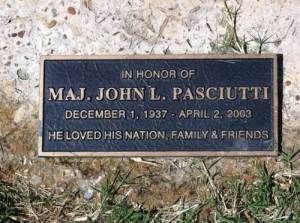 As Gen. Douglas MacArthur said in his legendary 1962 retirement speech at West Point:

Duty, honor, country. Those three hallowed words reverently dictate what you ought to be, what you can be, what you will be. They are your rallying points: to build courage when courage seems to fail; to regain faith when there seems to be little cause for faith; to create hope when hope becomes forlorn. … I bid you farewell.

Note: This story is included in the popular book, The Dog of My Nightmares: Stories by Texas columnist Dave Lieber, now in a newly-released fifth edition for 2012. Personally autographed copies are exclusively available here at the Yankee Cowboy Store in book or CD audio book. 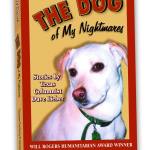