My editor resigns. Thanks Mike for being Mike

You may have seen the news yesterday about The Dallas Morning News Editor Mike Wilson resigning.

Mike was my boss, and has been for six years. Whenever someone tells me they like The Watchdog column, I say credit should go to the editors for backing the project. Less than a half-dozen newspapers have a watchdog-styled regular column.

What’s the reason for his resignation? As Mike so creatively explained his decision: “Running a newspaper today is like swimming across a hot fudge river: You gorge yourself on the decadent pleasure of it, but you have to kick like hell to get to the other side. So I’m full, and I’m tired. My immediate plan is to just recharge.”

Although I’ve been in the news business slightly longer than Mike, I realized early on in our relationship that not only is he a lot smarter than me, he’s also a far better writer and a more sensitive human being than I am. 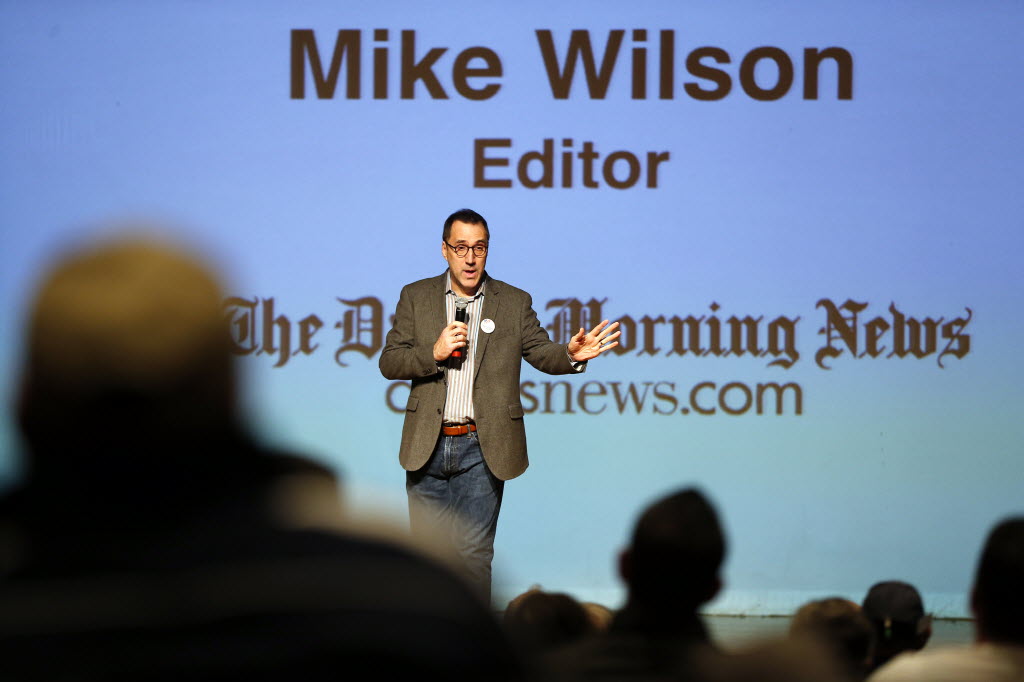 I realized that he could teach me things I needed to know. I respected his wisdom.

And the lessons were huge.

I’ll give you a couple of examples.

He wrote me, “Dave, would you please write this reader a brief but courteous note, as you should have done to begin with, explaining that you get hundreds of letters and unfortunately can’t offer help to everyone who writes in? You might even suggest a resource to her, as I’m sure you know a lot of roofing resources off the top of your head.”

He added, “Such a terse note harms our relationship with our readers and by the way, creates headaches for the Editor, who has enough already. Mike.”

Quite a memorable note for me! I do try to do that with all my mail, but sometimes, when overwhelmed, I am terse.

On another occasion, Mike sent me another learning note that yielded the biggest results ever. See, I wrote a column about poor AT&T customer service but broke my rule about always calling to get the company’s side. On this one, I remember explaining later that I didn’t even know for this column what question to ask them.

Mike helped me out. “Dawg,” he wrote. “Just catching up on this issue. It’s important that we call the subjects of our stories for comment – every time. The question for AT&T should have been, ‘Your customers tell me they can’t stand you. What are you doing about customer service?’”

Then Mike pushed me to work my way up the chain at AT&T so I would get proper answers. But I had no idea how far his push would propel me.

A couple of weeks later, I was sitting in the office of then AT&T CEO, Chairman, President  Randall Stephenson. The CEO invited me for a one-on-one interview. He began by showing me how he monitored customer service.

I countered by pulling out a red binder that collected the most recent 100+ complaints I’d received about his company. If you’d like to read the story, here is “What happened when our watchdog gave AT&T’s CEO a binder full of customer complaints?”

It’s one of my favorites, and without Mike’s intervention, it never would have happened. I couldn’t imagine myself ever in the CEO’s office. Mike could.

Multiply his help to me by hundreds, no thousands of learning situations involving my colleagues, and you know Mike Wilson has left his mark in great ways on so many of us. Thank you, boss.

[This story appeared in Dave Lieber’s Watchdog Nation newsletter, fun and helpful, which comes to your inbox Wednesday nights. Sign up for it here.]