After 10 years as Watchdog, Dave Lieber recalls his favorite

Watch comedy speaker Dave Lieber celebrates a decade as The Watchdog newspaper columnist by sharing his favorite story about his 100-year-old “oldest citizen of Watchdog Nation.”

You can read the full story about Ruth Wingfield and how you're never too old to fight back and win. 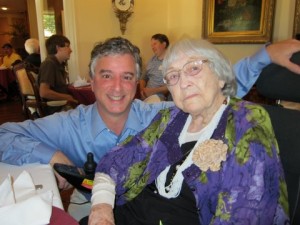 Of the tens of thousands of complaints Watchdog Dave Lieber has received, his favorite is Ruth Wingfield's. She wrote a check to an insurance company for $480 when she meant it to say $4.80.

Forgive her. She was close to 100 years old.

She contacted The Watchdog, whom she called “Dogpatch Guy.”

Forgive her. She was close to 100 years old.

But she learned very quickly how to shout the magic words from Dave Lieber's Watchdog Nation at a company that was treating her unfairly.

“Who is your regulator??!!” she demanded to know.

If she can do it, anyone can!