Murder. My First Week at The Dallas Morning News

I grew up around murder. As a kid living in Manhattan, I knew all about mob bosses slain in public places. When I was a high school freshman, “Crazy” Joey Gallo was put out of business at Umberto’s Clam House on Mulberry Street. A few years later, Paul Castellano was knocked off outside Sparks Steak House.

Then I moved to Philly for college, in time to catch news about godfather Angelo Bruno taken out with a bullet in the back of his head as he sat in a car outside his South Philly home.

In 20 years of Texas living, though, I never saw anything like that. That changed last week. It happened on the third day on my new job as a columnist at The Dallas Morning News. 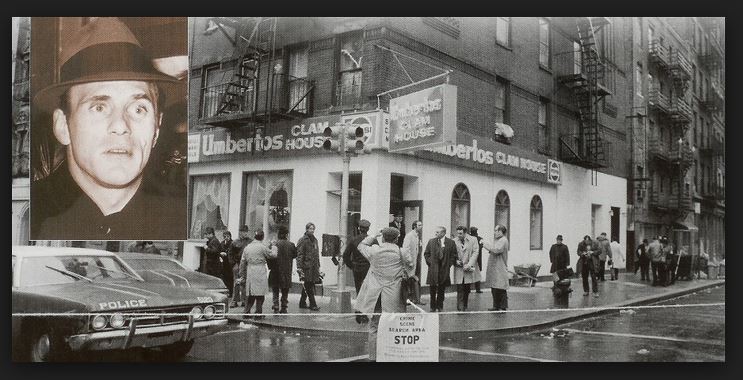 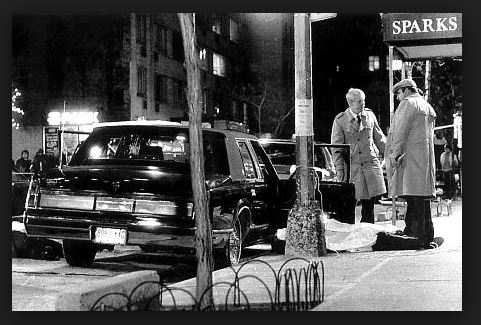 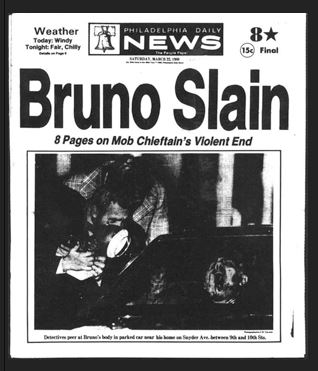 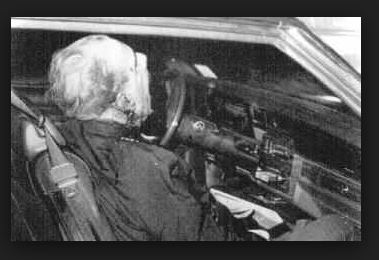 Godfather Bruno didn't have to go far.
Here, he's in front of his house.

Wednesday night around 8 p.m. I’m walking out of my neighborhood hardware store. And — as all important news seems to come to me — my wife Karen sends me a text message: “Drive by shooting at southlake town sq after 7:00 tonight. Guy died in transport to Baylor grapevine.” 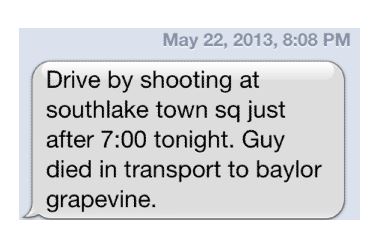 That’s eight miles from my house. Instincts kick in. I must go. I make a call and volunteer.

Five months ago, when I walked out of my former newspaper building for the last time after an “economic layoff,” I was certain my 38 years working for daily papers had come to a sad little end.

Now, though, I’m standing in front of a Victoria’s Secret store on a street I’ve walked down dozens, no hundreds of times in the past decade. My family and I grew up in Southlake Town Square. I was friends with the creator, Brian Stebbins, who died last year. Brian is gone, and as of tonight, so is the innocence of one of America’s most-admired shopping centers.

Juan Jesus Guerrero Chapa, a 43-year-old father and husband, was gunned down in front of his wife on one of the safest streets in America. He was a lawyer for a Mexican drug cartel, an expatriate who lived in a gated community in Southlake for the past two years. 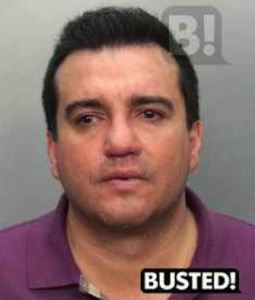 But I don't know any of that when I arrive at the crime scene. Don’t get the idea that I'm here on assignment for The Dallas Morning News as part of my future role as a columnist (first piece appears Friday, May 31; Sundays and Fridays thereafter). No, I'm here in a much more humbling role. A job I’d never held before, and one that doesn't actually exist.

Assistant to the night police reporter.

If you know anything about newspapers, you know night police reporters don't have assistants. Often considered the low man or woman on the totem pole, the job holder suffers from bad hours, a shortage of column inches (because the paper is already filled), and the uncertainty of never knowing what you'll do on a given night.

True, it is a perfect starter job for young kids breaking into the game. I did it for years on and off at various newspapers, paying my dues. Also perfect for old-timers who’ve done it so long cops forget that the reporters aren't fellow cops. They tell them stuff.

I present myself to reporter Tristan Hallman, who only a day earlier had written a brief item on page 2B that hardly anybody saw: “News hires veteran watchdog columnist.”

I reintroduce myself and explain that I live nearby and have dropped by to assist him in any capacity he deems appropriate.  But I speak fast 'cause he's on deadline: “Anything I can do for you?”

He looks startled by the question. He doesn't have an immediate answer. Most likely, nobody ever asked a night police reporter if he or she needed help. It’s a lonely job.

I do understand this. If a newspaper columnist whose hiring merits a headline, even a small one, presents him or herself to me when I'm a night police reporter offering to help, I’d know it's a prank on the new guy.

But this is no joke — and actually it's a perfect tactic to break me in. It’s humbling – and appropriate. A way for me to reconfirm my basic mission. Nighttime. A murder. Welcome to town, sport.

It reminds me of the lesson I learned working the “cop shop” at my internship in the 1970s at the Atlanta Journal. A man who owned a barbecue store was gunned down in a robbery. I was going to brief it.

A general assignment reporter, Joe Dolman, stopped by to check the crimes. I told him my plans to brief the BBQ man.

“It’s not a brief,” he scolded. “It’s a story. Everyone has a story. He had a family and he ran that store and now he’s dead over something stupid.”

Then Joe Dolman, who still writes a column for Newsday, authored the living hell out of that story.

From that moment on, I see story in everything.

So I’m Tristan’s legman, unofficially, and I’m not sure that he, some 32 years younger than me, even knows what that is. Not that it matters. The kid doesn’t need me. By the time I arrive, he knows everything that’s happened here. He’s been briefed by the police chief and talked to witnesses. He’s taking photos and, in fact, is already sending his story.

So I scrounge for little details, anything to help. A few quotes from people. Digits on the license plate of the victim’s car. Minor mood stuff. But over there, well past the police yellow tape, there’s a vehicle riddled with bullet holes, only a few miles away from where Bonnie and Clyde used to romp and roll. 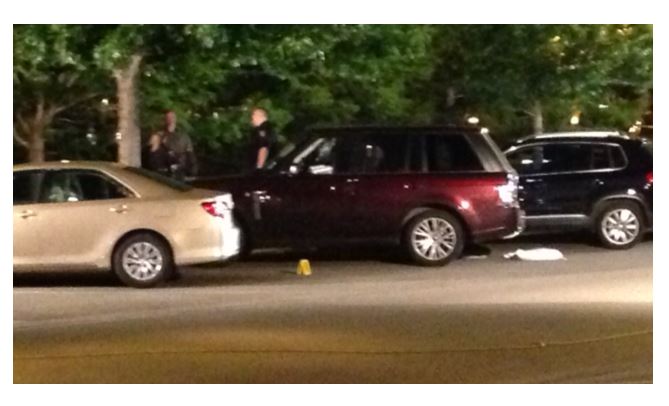 This was the first time I worked a crime scene with an iPhone.
The victim's Range Rover is in the middle. 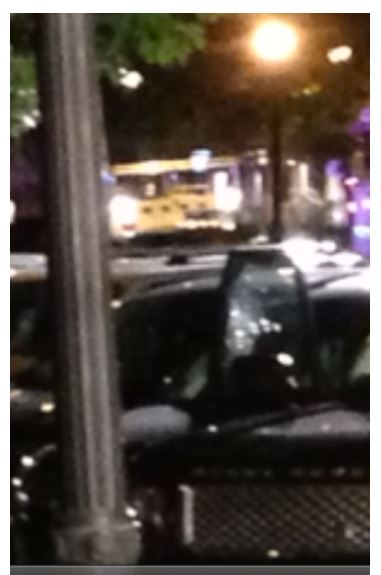 Forced to stay behind police barricades, the zoom on my iPhone got me close enough to see the bullet-ridden glass window. Look closely at center,

I know what this is. The journalism gods are speaking to me. Stressing upon me the gift I’ve been granted. They let me back into the game when I thought my run had ended. Gave me a chance to work alongside some of the most talented journalists in America today. Folks from Tristan Hall onward with thousands of years of collective work experience. I'm going to learn a lot.

What I saw in my first week at The Dallas Morning News is the opposite of industry trends. I met some great people who care deeply about their newspaper. There are so many interesting initiatives going on inside that building; I can’t wait to tell you about them. My hiring is only one of many. Feels like a perfect fit.

Back at my new desk, I don’t yet have a computer. My voice mail just began working. If I get lucky, I’m hoping to score a stapler. More important, though, is I have a press card. A ticket, my columnist hero Pete Hamill says, to a front row seat watching the world.

And there’s a murder near my house. And I’m there. I have a reason to be there.

That reason is you. I’m supposed to tell you what's going on. 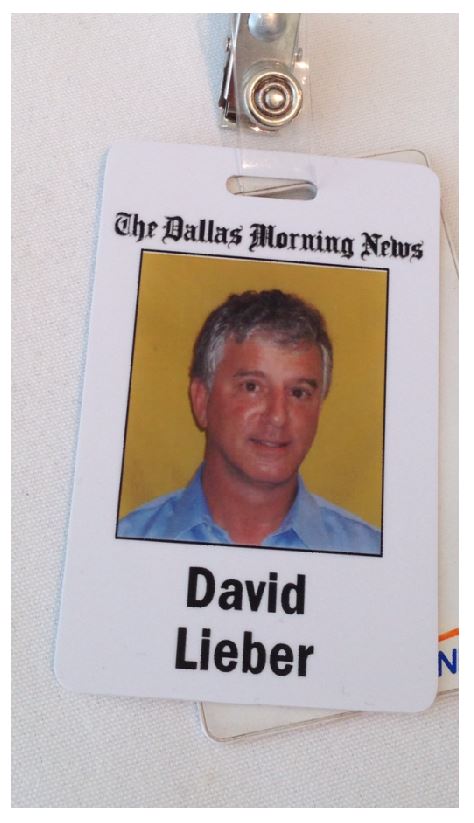 Publishing note: Dave’s first two columns appear Friday, May 31 and Sunday, June 2. If you’re not yet subscribing to THE DALLAS MORNING NEWS, please join Dave and give Texas’ finest newspaper a chance to show you what we can do. Visit the subscriber page here.

Read what Fort Worth Weekly writes in “The Watchdog Now Barking in Dallas.” 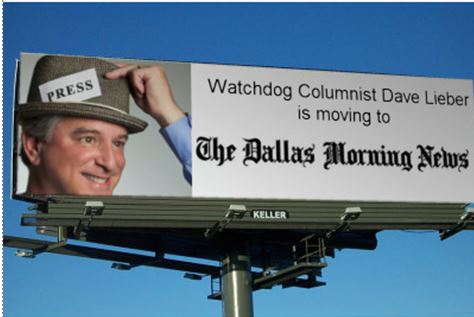