My little girl is getting married today

My little girl is getting married today.

Well, technically Desiree is not my little girl. Yes, I am her legal father, but when I first met her she was already 11 years old. And taller than me.

Heck, when we first met she piped up and called me “Little Man.” Her mother, whom I fell in love with and soon married, told her to stop. But it took years for Desiree to stop calling me that.

Then one day, suddenly, she called me Dad.

From others, there are parenting books about child-rearing practices, child discipline, parental responsibility and even bad parenting. From me, there were simple newspaper columns about her life, a lot of fun, but not much in the way of theory. 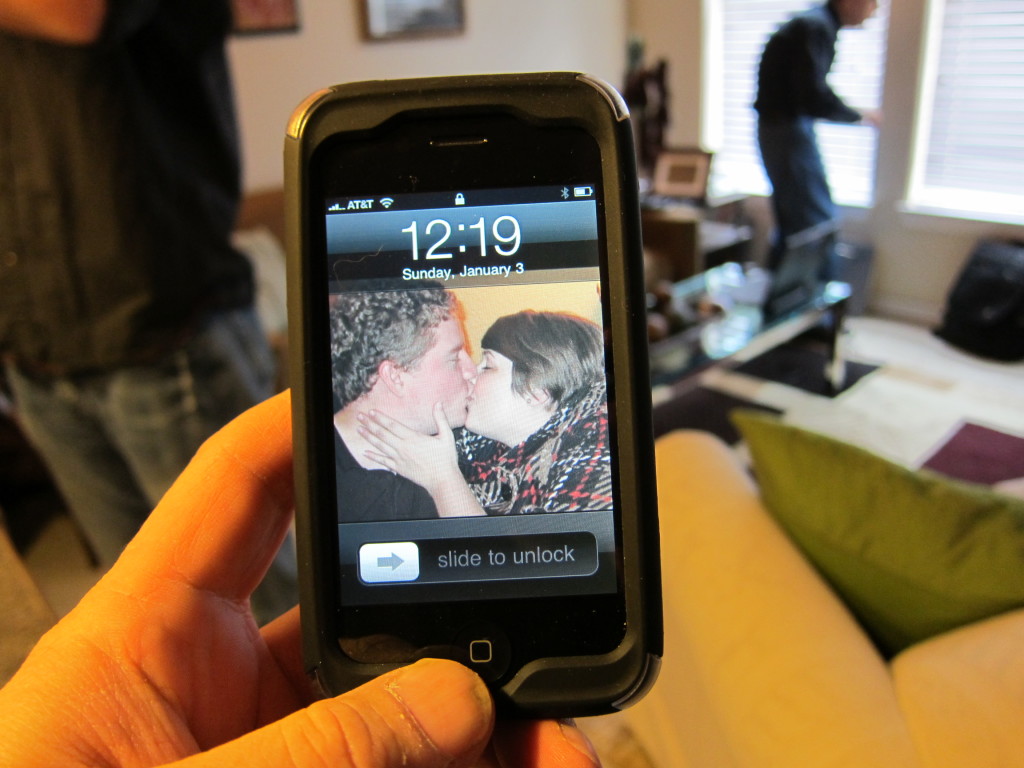 There's an APP for that!

Because I'm a columnist at the Fort Worth Star-Telegram, years ago, when she was a teenager, her life was sometimes inserted into the newspaper like a diary by me. Why not? Watching her grow up into the lady she has become is one of the most fun and funny stories I've witnessed in my storytelling life.

Sure, I always asked her permission before writing about her, and often, she would extract in exchange for her private life going public a new pair of shoes or something similar. She was a great sport about it.

Looking back, there were a couple of times I abused the process. When she was 14,  I ran her loopy first boyfriend off. Not in person. No, that wasn't possible. I never got to meet him face to face because I think he was scared of me. But I wrote a newspaper column about him. I wrote:

My Rule goes like this: Desiree can “group date” with a large group of other teens – but only if her escort first comes into my house and sits with me in the living room for a brief chat.

Apparently, word about My Rule has spread through the neighborhood. Desiree, of course, blames me for her sorry social life.

Still, there was that Sunday afternoon a few months ago when the boy who has shown the greatest interest in Desiree announced that he was coming over. I call this boy Midas for reasons that will soon become apparent.

When he visited, I heard a horribly loud noise coming from down the street. The bathroom windows began shaking from the awful vibration.

As the noise grew closer, it sounded as if a B-52 bomber was about to land on the roof. I quickly wiped the shaving cream off my face and jumped in the shower. The horrible noise stopped, and a car door slammed.

The windows rattled, but soon, the noise faded in the distance. I threw on clean clothes and ran out of the bathroom screaming, “Is he here yet?!”

Desiree smiled like a cat who just ate a goldfish and said, “He was, but now he's gone.”

“What was that horrible noise?” I demanded.

“His muffler,” she replied.

So I had missed Mr. Midas. And the teen had vroomed off before this old man could begin the interrogation.

After that,  he never came around again.

The other abuse was the story about my promise to buy her “a shiny red convertible” when she got her learner's permit. I wish now I could take that one back.

“And because it's a convertible, the wind will blow through your hair on hot summer days,” I wrote.

I described how she would find it in the garage, tied up with a pretty bow. I bragged about its special features – electronic ignition, radial tires with shiny hubcaps and the way it handled sweetly on the turns.

When the moment arrived, we walked into the garage for the unveiling. There it was. Shiny and new. Bedecked with ribbons. Just as I had promised.

Desiree looked at her gift. She screamed, “Oh, you're so mean!”

It was a new Toro walk-behind power lawn mower. 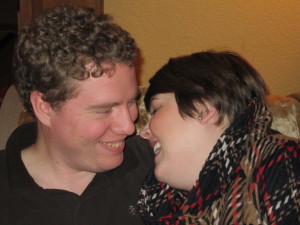 He makes her laugh.

Slip ahead a dozen years. She is 28 years old, a nurse, about to marry a wonderful guy, Alex.

I like him. A lot. He makes her laugh.

What does a dad think about on the eve of his only daughter's marriage? As I stand poised to walk her down the aisle, I am thinking about the name. In our family, the name means so much.

On her 18th birthday, I wrote about the name. The story began:

When I have flashbacks about my daughter's life, they don't begin – like those of most fathers – on the day she was born.

I didn't meet Desiree Lauren Bertschinger until she was 11 years old. 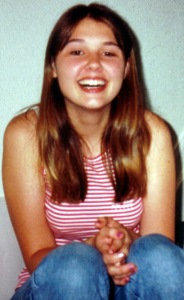 She was nearly formed, with messy closets, strong opinions and high ideals.

So I must skip ahead a few songs on her life's album to her middle school cheerleading days … singing in the high school choir … first days driving … graduation day from high school.

My flashbacks are snippets of a little girl grown big, a girl who does not hear from her biological father, a man who lost the only important things he ever had – a terrific wife, Karen; a great daughter, Des; and a wonderful son, Jonathan. And he lost them all to me.

After I married Karen, Desiree went through a brief period where she tormented me. Once I asked her why, and she said, “I want to see if you are going to stay.”

There's no genetic link between us, but there are similarities. She is left-handed and a little clumsy. Like me. She's also a back-talker. Like me. (Our arguments have no endings.) We both love practical jokes.

People see her with me and do double takes because she is 2 inches taller. I explain that she's my stepdaughter, and they say, “Oh, that makes sense.”

Fortunately, Desiree no longer uses her original nickname for me, “Little Man.”

Until recently, she called me David. In the past year, however, she began calling me “Daddy.” Maybe she's making up for lost time.

Exactly a month ago, on her 18th birthday, my present to her was not something that fits in any box. There was no gift-wrapping or fancy bow. It is not something you usually give to another person.

Our family, including Karen's parents, John and Joan Pasciutti of Keller, gathered in the living room, and I handed Des a brown envelope.

Des cut her finger on the envelope's metal clasp, then accidentally let go of a helium birthday balloon she was holding. A big frown spread across her face.

I remember the frown because of what happened next. Her face changed dramatically as she pulled a document out of the envelope and began reading it. She smiled, turned to me and said, “Thank you!”

Then she began crying. She brought her hand to her mouth, then covered her eyes. Tears toppled on to the document.

Karen hugged her. Austin, her 3-year-old brother, asked, “Why is she crying?”

I put my arm around her and explained, “All you have to do is take this to a notary public and sign it. We mail it back to the lawyer. And then she files it in court and it becomes official.”

Original Petition For Change Of Name Of Adult

Petitioner requests the Court to grant a change of Petitioner's name to Desiree Lauren Lieber.

The reason for the requested change is that Petitioner wants the same last name as her mother and stepfather.

A few legal words on two sheets of paper. The start of the second side of songs on her life's album.

“You and I need to get dual bathrobes with our initials monogrammed on them!” I joked.

See, we both would be DLL.

In the weeks that followed, Des practiced signing her name the way a bride practices before her wedding.

At the Tarrant County Courthouse on Thursday, my father-in-law and I made a side bet over which woman in the family – Des, Karen or Joan – would cry first at the hearing. Silly me. I let him pick Des.

“All rise, please,” the bailiff said.

The bailiff looked out and called, “The Bertschinger case.”

Desiree walked with our family lawyer, Lori A. Spearman of Grapevine, to the judge's bench.

“Are you Desiree Lauren Bertschinger?” Spearman asked her for what would be the last time she could legally say yes.

“Tell me,” Spearman said, rolling through the required questions, “have you ever been convicted of a felony?”

At that moment, Desiree burst out crying. The lawyer told me later that she thought that maybe Desiree was hiding a criminal record.

Actually, though, Desiree suddenly realized what was happening.

The judge asked, “Why do you want your name changed?”

Desiree turned, pointed at me in the front row and answered, “Because that's my rightful father.”

Thinking about it a few days later, I'm certain that those are the five greatest words anyone has ever said about me.

She gets a name, but I get a daughter.

For me. Her rightful father.

Today, five hours and 12 minutes from now, God willing, I will walk her down the aisle and present her to Alex. A man I trust and admire. A man whom Karen and I are honored to call our new son. They will be married by the same judge, Sharen Wilson, who married us 16 years before.

A dad and a mom live a lifetime for a day like this. My little girl is getting married today. Desiree Lauren Guthrie. We're so proud of you. May a world filled with love come your way.