See the best gift a speaker ever received

I have two special ladies to thank for helping me celebrate National Columnists Day, April 18, 2015.

Martha Floyd and Marile Turney truly went above and beyond.

These women are ostensibly members of the Park Cities Baptist Church Decorating Committee. It was their job to design the centerpieces for the 20 tables and also decorate the stage for their quarterly FridayFest event at the leading Dallas church.

I was guest speaker.

When I arrived, I first noticed the stage. There were old typewriters nestled alongside rolls upon rolls of newspapers stuffed in delivery boy bags. That alone would have been enough to impress me. 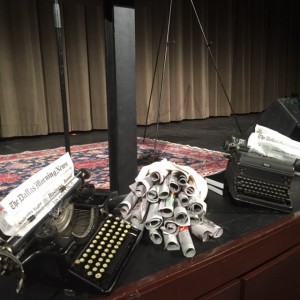 Then I saw the centerpieces. The pair had created a standing display on each table that showed my column mug shot – life-sized – on one side and my Watchdog Nation branding symbol in full color on the other. Every table had my column neatly displayed, too. 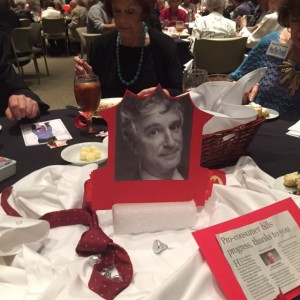 They weren’t done. Every tabletop shared space with a white shirt and a tie wrapped around it to simulate Clark Kent taking off his shirt. The ladies told me they contacted widows in the church and asked them to donate their dearly departed husbands’ shirts for the event. 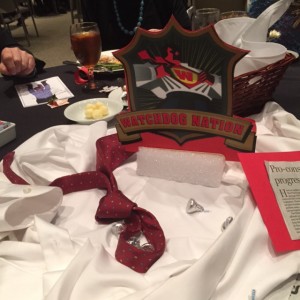 They still weren’t done. Next to each copy of the night’s program (my picture was on the cover so I was beginning to worry about overkill!) was a specially-made napkin holder that mimicked the “W” on the cover of my Watchdog Nation super-consumer book. The ladies made 200 of these! 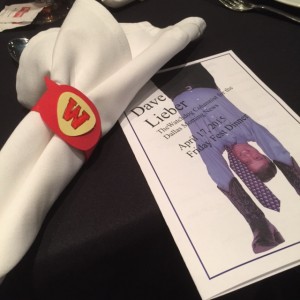 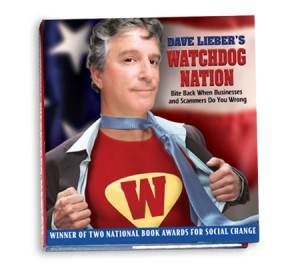 Martha and Marile didn’t know that today is National Columnists Day. Few actually do. They only knew that they still hold the job of newspaper columnist in reverence, as I do.

They read. They think. They care.

This past week a national survey showed newspaper reporter had dropped to the worst job in America — #200.

Don’t tell Martha and Marile. They like what we columnists do. And they showed it in a way that I never expected, that humbled me, that made me proud.

Thank you, ladies. And thank you Park Cities Baptist Church, with its 11,000 members strong, one of the most prominent churches in North Texas.

Inside The Great Hall

And Happy National Columnists Day to every columnist — and more important, to everyone who has a favorite newspaper or online columnist.

National Columnist Day is an unofficial national holiday created by former Kansas City Star columnist Bill Tammeus (now author of the respect “Faith Matters” blog) and me 20 years ago on the 50th anniversary of Ernie Pyle’s death in the closing days of World War II.  Pyle was the greatest columnist of the 20th century. 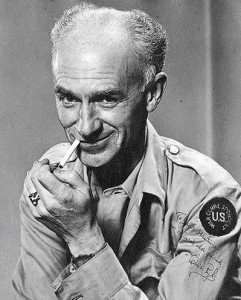 Ernie Pyle was a Pulitzer-prize winning columnist in the 1930s and 1940s. Many consider him the greatest ever.

Read Bill’s version of how we created the day here. And here’s mine. The holiday is celebrated by the National Society of Newspaper Columnists.

The author of this post, Dave Lieber, is The Watchdog columnist at The Dallas Morning News and DallasNews.com. Dave Lieber is also a Certified Professional Speaker who entertains, educates and enlightens audiences across North America. Watch Dave's popular TED talk on the power of storytelling.