Americans want to know that someone is fighting for them, Fort Worth Star-Telegram columnist and Watchdog Nation founder Dave Lieber says.

The newspaper’s Watchdog columnist thanked the Tarrant County Trial Lawyers Association for honoring him with the 2012 Lanny Priddy Award for Courageous Pursuit of Justice.

In his acceptance remarks at Fort Worth’s landmark Joe T. Garcia’s restaurant, Dave Lieber said: “Between trial lawyers, prosecutors and newspaper people, we’re the last line of defense in a world that’s troubled and needs help. There aren’t many of us left, you know? I think that Americans have a basic need. They need to know that someone is fighting for them.

“After 37 years of daily newspaper work, I still get jazzed up to do this because I remind myself all the time why I started in the first place, what my goals were. Every day there are too many people counting on us. And there aren’t too many lines of defense left.” 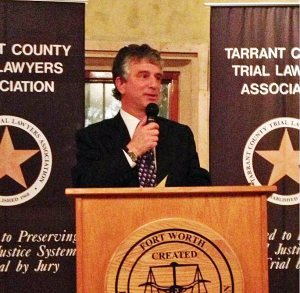 The award is named after attorney Lanny Priddy, an honored defender of the powerless. He died in 2008. Priddy, a longtime ACLU volunteer, ran a non-profit Dallas organization representing mentally and physically disadvantaged people. This is the fourth time the award has been presented.

Association President Jason C.N. Smith presented Lieber with the award. Smith said, “The Watchdog has been very important. It’s one of the few media organizations that consistently take on powerful interests, whether they be government or large corporations, and takes them to task for doing injustice to people all the time.”

He added, “It’s a great thing that he’s able to do that good for people who less and less have an advocate in our society.”

Smith cited a judge who awarded Watchdog Nation's founder second place in a national newspaper contest this year. The judge stated, “If I were a government official in Texas and picked up the phone to hear, ‘This is David Lieber,’ my heart would skip a beat. And not from joy. Lieber is a classic watchdog journalist, looking out for the little guy – and he gets results.”

Citing an editor’s summary of Lieber’s work this year, Smith continued, “Dave regularly moves the needle. After he revealed how the state Department of Insurance had taken steps to make it hard for consumers to find out about violations by insurance companies and agents, the department reversed course and began once again providing the information on its website.

“When he wrote about a widow who couldn’t get her husband’s last paycheck from Wal-Mart, the retailer finally gave her the check, an extra $500 in cash and a personal apology from the store manager who came to her house.

“His story about illegal dumping on a homeowner’s property prompted the company that was responsible to eventually remove 70 mounds of debris.

“His column about promotions and free gifts cards offered by Texas dentists to get Medicaid patients prompted the state regulatory agency to investigate.

“His story about the callous treatment a patient received after her baby’s premature birth led a Fort Worth hospital not only to apologize but also to implement a new policy named for the baby who died.

“When an ID theft ring was busted in another state, Dave revealed that the information they stole came from Tarrant County’s official online court records. He exposed a so-called investment club that may be fleecing the flocks at black churches.

“And also this year, he revealed a used appliance seller who was misleading customers and a fertility clinic that was charging a woman a high fee to transfer a vial of semen. He hammered double dipping practices in the Fort Worth school district, a building spree by Tarrant County government and misleading sales tactics by an Arlington advertising company.” 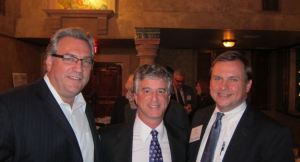 “I have to confess,” Brink wrote after receiving her award. “The courage was never mine. It was always the courage of others, those who came forward to expose corruption in government, to speak of being raped in prison, to show discrimination in the workplace, blow the whistle on fraud or bullying in a public school or corners cut at a nuclear power plant – all at the risk of not only losing their jobs, but possibly their lives. I was simply their voice.” 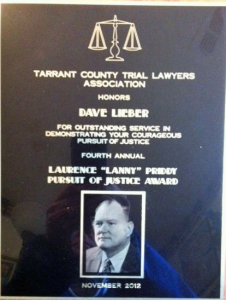 Dave’s new Bad Dad book won two silver medals in 2012 national book contests in the categories of True-Crime Non-Fiction and Overcoming Adversity, Challenges and Obstacles. Learn about Bad Dad book here. The 2013 edition of his book Dave Lieber's Watchdog Nation: Bite Back When Businesses and Scammers Do You Wrong has been released.