A little online advertisement for a vending machine was enough to trigger a story that shows a universal truth. For storytelling in business to work, a story must have that universal truth.

The ad I saw was for a 2009 Planet Antares Office Deli vending machine. As The Watchdog columnist, I wrote about this company five years ago. It was a memorable experience.

The company was run by bullies. The company invited me to one of its sales seminars at a Texas hotel. The company even sent me flowers the day before. I took a photo. 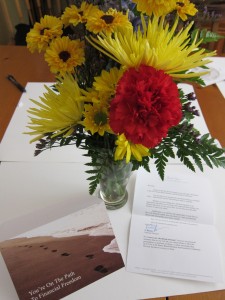 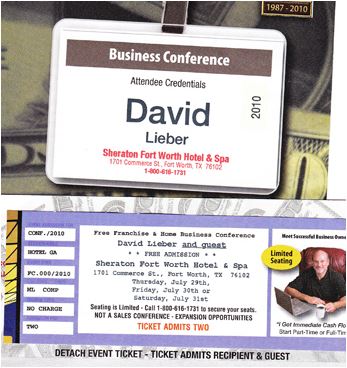 I attended the meeting. Learned about the wonders of the Office Deli vending machine. So wondrous that I pulled out my Blackberry (remember it was 2010). I took this photo below. That got me in a spot of trouble. 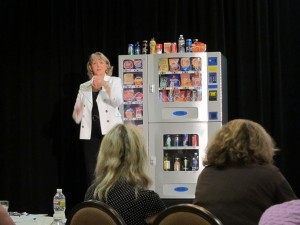 The bullies in the company asked me what I was doing? Where did I work? What was my purpose there?

The bullies of Planet Antares not only kicked me out of their rented meeting room they also tried to kick me out of the hotel.

A few hours later, the bullies' lawyer sent a warning letter to my newspaper ordering me to never write about Planet Antares, and if I had already to remove and retract the contents immediately upon threat of a lawsuit.

The bullies' lawyer also accused me of trespassing.

One problem with that. Remember this picture?

After seeing the online ad for the Office Deli, I searched more and found more machines for sale. Several of the ads said “unopened” and “in original packaging” and “never used.” One said it was part of an estate sale, unopened, in the family garage.

What does that mean? Some of those people, perhaps, were at the seminar that I was ejected from. These buyers invested thousands of dollars.

Oh, and the lawsuit threat from the company notwithstanding, I wrote about these bullies. They were all hat and no cattle.

Now the bullies are gone. They've scattered on to other activities. Planet Antares filed bankruptcy.

I have two images that came up in my quest to tell this story. The first is this house, founder Dana Bashor's, in the same gated community in California where the Kardashians live.

The second image is the one of those unopened boxes. They helped me find the universal truth in this story: chasing the American dream. The schemers at Planet Antares built upon the optimism of Americans to make their millions before their business crashed.

The universal truth of making money through business success is often a risky proposition.

So I led with that in my Dallas Morning News column:

Dreams that die often never emerge from their original packaging.

A how-to book isn’t cracked open. Workout clothes never sweat. Even office vending machines that for some represent dreams of a steady second income are abandoned.

Some Office Deli machines are still in use. But ads on the Internet show many owners trying to sell their 6-year-old machines, often in original packaging.

I knew it would end this way.

See for yourself how I did by reading the entire story on my newspaper's website: 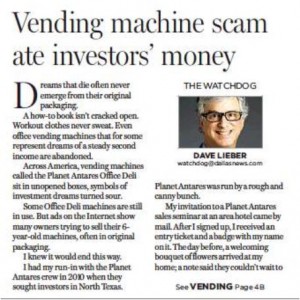