Summer Santa, Elvis and the Coolest House in Texas

Summer Santa, the all-volunteer charity that I co-founded in 1997, helped several thousand kids this year. But it was our toughest year ever. We sent 300 North Texas children to summer camps, but we ran out of money to send another 75 who applied.

So when you need more money, who can you call?

On Nov. 4, 2010, Summer Santa held a VIP sponsor party at the amazing Westlake, Texas home of former Westlake Mayor Scott Bradley and Kelly Bradley, one of Texas' most successful charity organizers. The Summer Santa board worked closely with the Bradleys to thank sponsors in anticipation of the charity's big event, the Sunday, Nov. 14, 2010 Elvis concert at Grapevine's Palace Theatre. (Tickets available at www.summersanta.org)

Even Elvis and Summer Santa were overshadowed by a house that is considered one of the architectural wonders of Texas. Originally designed by legendary architect Charles Dilbeck in the late 1930's, the home is a regular stop on any Texas architectural tour. No other house is quite like it.

Paigebrooke is the name of the Bradley home designed by Charles Dilbeck.

Truth is, this turned out to be one of the coolest parties ever! For example, Pat Dilbeck, the widow of the architect, attended. She says the Bradley house is one of her favorites designed by her late husband.

It was a night of legends. Here is Pat Dilbeck (right) with Peggy Nelson, wife of the late great golfing legend and humanitarian Byron Nelson.

Peggy Nelson has a new book out called Life with Lord Byron (you can buy it here). At the party, she sat in the dining room and sold copies. Nelson then donated all the proceeds to Summer Santa. Thank you!

Nearby, artist Ty Walls, who designed the original Summer Santa logo in 1997 (it's now a registered trademark), painted a portrait of Lord Byron that was up for bid. 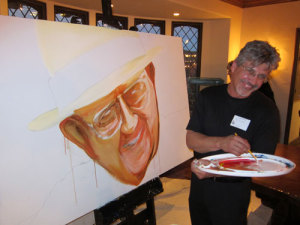 This magnificent portrait sold to the highest bidder at the party — garnering enough money to send two North Texas children to summer camp in 2011!

Here's a taste of all the fun. Food was catered by Chef Point Cafe, one of Texas' most popular eating places. Chef Point is a gourmet restaurant inside a gas station. It's been featured in the New York Times and on numerous TV shows. The owners, Chef Franson Nwaeze and Paula Nwaeze, brought staff and a Texas sized hunk of beef. 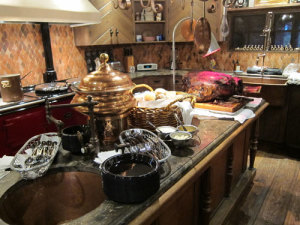 The party was organized by Darla Dennison (left) and Shirley Schollmeyer. Summer Santa says they are the best party organizers EVER!

Party hosts Kelly and Scott Bradley opened their home. Kelly was an original founding board member of Summer Santa in 1997.

The whole point is to thank the sponsors of the Nov. 14, 2010 Elvis concert. These folks have generous hearts. They want to help the Summer Santa kids.

Here's my fellow co-founder of Summer Santa, Judge Brad Bradley. This was his idea back in 1997. Little did he know that his idea would help more than 30,000 children with summer camp scholarships, toys for summertime play, back-to-school clothing and school supplies, free medical checkups and after-school programs. 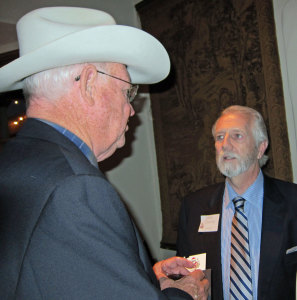 Are you ready for a preview of Elvis (playing for the first time with LongShot)? Here he is giving the audience a sampler of his concert:

This Elvis dude has the moves, for sure.

All for the kids who need help the most. Summer Santa works with a dozen area charities and six school districts in Northeast Tarrant County, Texas. Because our charity has no paid staff or physical office, the money donated goes STRAIGHT to the children's programs. That's what makes Summer Santa so special!