Tory Johnson: Ever have trouble fitting in?

Note: Tory Johnson is one of America's top motivators for women business leaders. Maybe you've seen her regularly on Good Morning America as head of its “Job Club” or heard about her national conferences called Spark & Hustle. Dave Lieber had a fun opportunity to work with Tory at her Dallas conference. In her follow-up post, Tory shows why she is such a great motivator. Notice the way she ties Dave's journey to her own and then to the reader. Masterful! She writes:

I‘ve got a thing for newspaper columnists.

I first met the one I'd ultimately marry when I was a college intern at ABC News assigned to assist the PR department. I was charged with calling Peter weekly to pitch items about upcoming segments on 20/20 in hopes of getting a line or two in his USA TODAY column. Even though I was only 19 and he was 35, we instantly clicked. Similar humor made it possible to chat effortlessly. He always said yes, and four years later I did too when he proposed in 1994.

But immediate connections aren't a given.

For my Spark & Hustle conference in Dallas, Dave Lieber, a Fort Worth Star–Telegram columnist, graciously agreed to share his humor and storytelling with our audience. He had everyone in stitches as he recounted his early days at the paper. As a divorced Jewish guy from New York, Dave didn't exactly fit the mold of a church–going Texan family man. Without a clue about who Garth Brooks was and whether chicken–fried steak is chicken or steak, he struggled to find his place — and his voice — among the natives. The process took considerable time and even more determination. To win over his community, he rode a bull and learned an entirely new language. (He discovered that “all y'all” is plural for “y'all” in Texas, for example!)

A lesser person would have thrown in the towel, packed up and fled. Not Dave. Today he's an award–winning writer and sought–after speaker who couldn't be happier or more successful living and working anywhere else. (Find his story here.) 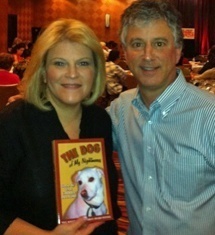 Anyone who has felt like an outcast would recognize herself in Dave's story. We face uphill battles all the time as we seek to make our products, services or ourselves known to a new audience. We worry about fitting in, finding acceptance and being well–liked. It's frustrating, uncomfortable and, quite frankly, it hurts our feelings. Too often we give up before we break through. That's because we're conditioned to expect overnight results. And if not overnight, then we want them in a few days — a week tops.

Instead of looking for a quick fix or instant gratification, be patient as you persevere. Believe me, I get how hard this is. I battle my own impatience everyday, too.

But during our three days in Dallas, I let go of some of it because I realized how many years I had been hustling to win over the hearts (and wallets) of several conference registrants. With just one or two exceptions, none of them discovered me 24 hours prior to the event and forked over nearly five hundred bucks to attend. I attracted a great crowd because I've worked at it tirelessly for a very, very long time.

Give yourself the required time to achieve the goals you've set out to accomplish. Sure, at some point you may have to decide if “this dog don't fight” — meaning you're barking up the wrong tree which requires you to change your message or your audience. But don't make that assessment before you've truly given your all.

Make it a GREAT week. I'm rooting for you.
Tory Johnson