What Pete Hamill, my favorite writer, taught me four decades ago applies more so today

[This originally appeared in The Dallas Morning News Watchdog column on Aug. 16, 2020]

All these years later, I still believe that the alarm clock episode of 1977, when I was 20 years old and in college, was the worst moment of my life.

I was excited. I was going to spend the day with my writing hero, my role model for a newspaper columnist, Pete Hamill, the person I wanted most to emulate in life. Hamill came to town on a book tour. I, a college newspaper columnist, was going to ride with him in his limousine and watch him appear on TV and radio shows and in between talk to him about anything and everything.

I remember screaming. I couldn’t believe it. I had blown it. I was embarrassed and disappointed and crazy angry at myself.

Then I pulled myself together and vowed to track him down. I headed downtown and found him! He was in a TV studio being interviewed by a host who hadn’t read his new book.

“Oh yeah,” he said. “How ya doing? I didn’t know what you looked like. Stick around, will ya?”

Pete Hamill died on Aug. 5. He was 85. I like to say that if I hadn’t grown up reading his newspaper columns I could have become an Amway salesman.

I started reading his stuff in the New York Post in 1971 when I was 14 years old. I remember how it happened. Around 6 p.m. on weeknights, my father would slide a dime out of his pocket dime holder and send me out for the late edition of the Post so he could check the closing stock prices.

The truck would pull up. A bundle would get tossed out. Joe the newsstand guy would cut the wire and I’d pull the first one off the top. It still smelled of the printing press.

I’d walk home along Broadway in Manhattan reading Hamill’s column, which he had just finished a few hours before. I remember laughing or crying or getting angry, depending on the subject – and marveling that this job of a newspaper columnist even existed.

Imagine a 14-year-old boy who knew exactly what he wanted to do with his life. From then on, I studied his work. He was my top teacher, my inspiration.

That’s why my late father’s little dime holder is one of my prized possessions.

Do you have a mentor? If you do, did you ever tell her or him what they mean to you?

In the limousine, I told Hamill.

“I try to figure out what’s going on on the other side of your typewriter,” I said. “So you’re my teacher in a way.” In my early columns for the college newspaper, “I tried to be Pete Hamill, and it didn’t seem right.”

“Everybody does that,” he said. “You go through stages: you imitate, you emulate, you equal and you surpass.”

We talked most of the day in between his other interviews. When this almost perfect day was over, I asked him to sign my copy of his first collection of columns, a book called Irrational Ravings. A strange title, but that’s how then-Vice President Spiro Agnew had referred to his writings.

“For David, thanks for being such a good interviewer,” he wrote. “And I’ll see you in a city room. Cheers, Pete Hamill.”

His departing words to me were, “Do good writing.”

Hamill wrote about civil rights and Vietnam and politics and entertainers and sports. He had an uncanny instinct to be at the center of a story as an observer – and then he could tell what he saw and what it meant better than anyone. When Robert F. Kennedy was shot, Hamill was a few feet away.

“Kennedy’s face had a kind of sweet acceptance to it,” he wrote. “The eyes understanding that it had come to him, the way it had come to so many others before him. The price at the attempt at excellence was death.” After that, Hamill couldn’t write for months.

Caught near the collapse of the twin towers on 9/11, he wrote, “We're all walking north – thousands of us, holding handkerchiefs to noses, coughing, a few in tears. A few more blocks and I'm home – my own face and clothes a ghastly white, and my wife is coming out of the door, after checking telephone messages; about to race back into the death-stained city to search for me. We hugged each other for a long time.”

We had one other get-together. In 2005, my 12th year as a newspaper columnist, I hosted more than a hundred columnists from the National Society of Newspaper Columnists at the Gaylord Texan Resort & Convention Center in Grapevine. I arranged for Hamill to receive the Ernie Pyle Lifetime Achievement Award.

It happened to be his 70th birthday, and so my wife presented him with a cake.

Before he accepted the award, in introducing him, I told everyone the alarm clock story.

When Hamill began his acceptance speech, he said, “Dave made me remember that scene when he came in late. Anybody that gets in trouble sleeping in has my amazing sympathy.”

After his speech, he asked me if he could spend some private time talking to “celebrate not just the birthday,” he said, “but the immense joy and privilege of writing columns for newspapers.”

We hung out in the sports bar. It was loud, but I could hear him. I remember two things about that conversation. The first was that I told him about the best column I ever wrote, from 10 years before. It was my marriage proposal (“Here in Texas, I’ve met the woman of my dreams. Unfortunately, she lives with the dog of my nightmares.”). He loved that.

Then I told him about my new position as The Watchdog columnist, different from the general, all-around opinion column I had been doing. He winced at hearing that. That stung me a bit.

“I’ll turn it into something,” I promised.

Later, he sent a thank-you note: “It was great meeting you and talking with you at the sports bar. Keep doing the work of the Lord, Pete Hamill.”

This is a tough one to write. I owe this man my livelihood, my dreams. And on the two occasions that we met, he treated me with such kindness.

In these tortured times, something he told me in 1977 helps me now. In that limousine, I asked him how covering the tumult of the 1960s and 1970s affected him personally.

“Well, I think it makes you more philosophical about things. You end up understanding that although it looks like the world is coming to an end, it isn’t. It’ll end up not better particularly, but different.

“And you have to accept the changes as a part of life. Nothing is going to stand still. Nothing. Cities are going to change. Babe Ruth’s not going to play for the Yankees. Things become more complicated or more simple, depending on what the events are.”

During today’s multiple struggles, don’t you think this is a good time to tell your mentor what she or he has meant to you? Without them in your past, where would you be today? That’s why I tell you this story – and also, so I could say farewell, Pete. 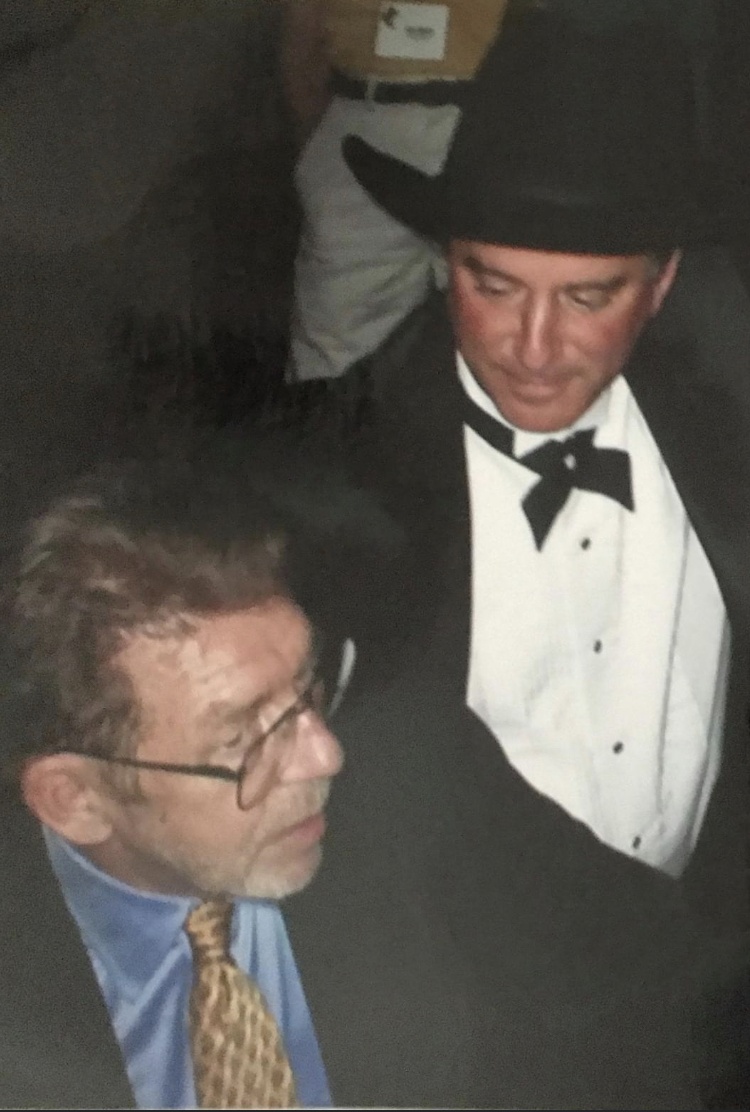 You can tell by the look in Dave Lieber's eyes how pleased he was that his writing mentor, Pete Hamill, had come to Grapevine in 2005 to accept a lifetime achievement award. 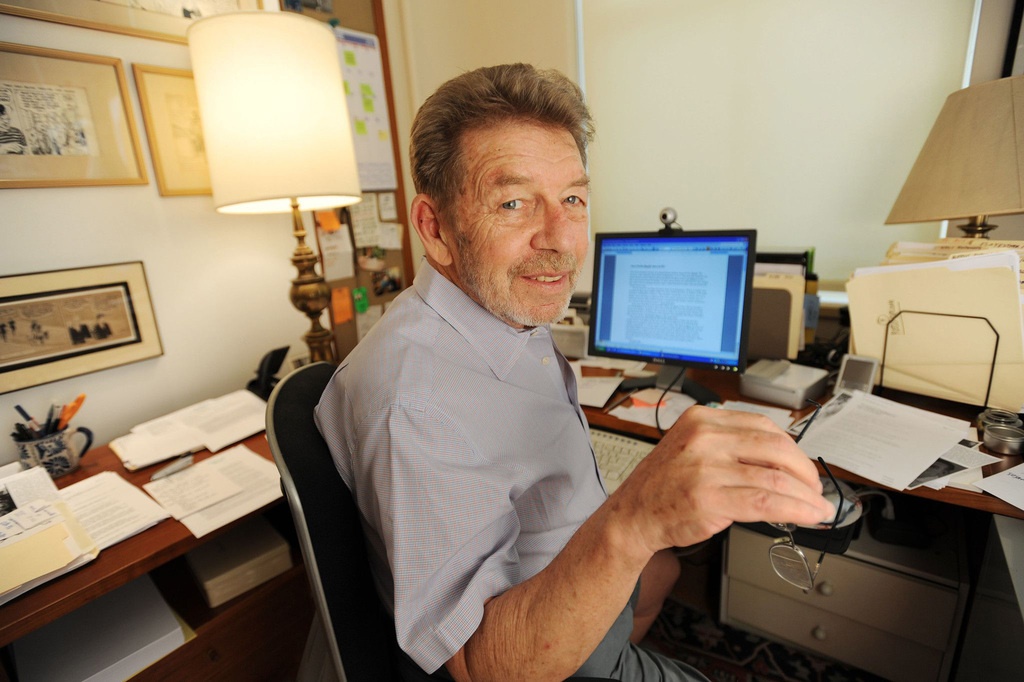 Pete Hamill, the Brooklyn-born bard of the five boroughs and eloquent voice of his beloved hometown as both newspaper columnist and best-selling author, died Wednesday morning at age 85 after a fall. (Susan Watts/New York Daily News/TNS) 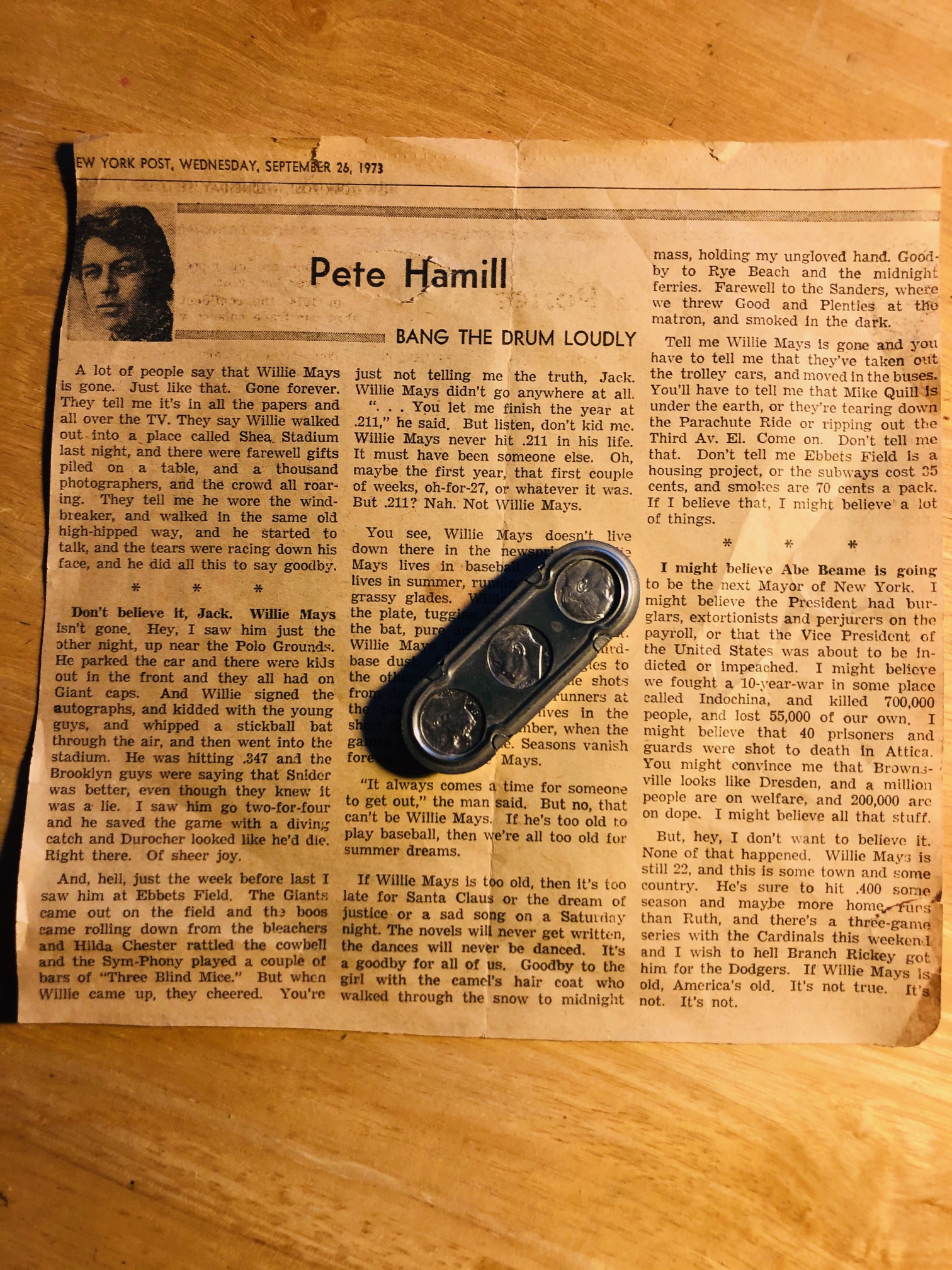 Watchdog columnist Dave Lieber says this dime holder, owned by his late father, represents his start on a career in journalism. Dave's father would slide a dime out and order Dave to go out and get the final edition of the New York Post. That's how Dave discovered Pete Hamill and journalism.