One of my pet peeves is when people come up to me and say, “It's a shame that the Internet is killing newspapers.” I heartily disagree. Newspapers survived for 15 years with the Internet offering our stuff for free.

What's killing newspapers, first and foremost, is the lack of advertisers. They've all but disappeared. (Exhibit A: Your thinning newspaper.) And no, legacy print advertisers haven't moved all their ad money into Internet advertising. Why? The big secret in our business is that online advertising doesn't work. Yes, it builds “brand awareness.” But people don't buy because of it. Feel like arguing the point? OK, ask yourself: do you click on ads and actually buy stuff because of the ads? Of course not. When I read online, I don't even see the ads on a page.

Advertisers have slashed their budgets because of the Great Recession. If the economy were stronger, they'd be back. But that's not happening.

With Internet, we still have newspapers. Without advertisers, we've got nowhere to go but down. And we're getting there fast.

I submit another reasons why newspapers are dying. There's no mandatory read in them anymore. And I have two words for that.

Aside from Erma Bombeck, he is, in my opinion, the most popular American columnist of the last half of the 20th century. He died in 1994, a year before the Internet began taking over our lives. He never knew what it was like for his stuff to be given away for free. But I submit that if Lewis were still alive and newspapers only offered his stuff in their printed edition, at a cost, we'd still be selling papers.

Yes, the syndicated Atlanta Constitution columnist was THAT good, and his following was that strong. He had fans throughout the nation that looked forward to his columns in a way that no other columnist since has matched. (Apologies to my many National Society of Newspaper Columnist pals.)

I never met Grizzard, but by some strange quirk my memorial column after he died appeared in his final book, The Last Bus to Albuquerque (Longstreet Press, 1994). I had sent a copy of my piece from the Fort Worth Star-Telegram to then-Atlanta Constitution columnist Cynthia Tucker (Pulitzer for commentary, 2007). She passed it on to the book editor. And there it appeared, following a tribute piece by the legendary sports columnist Furman Bisher. Wow. 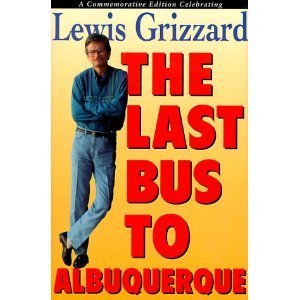 My lead: “That summer in Atlanta, 16 years ago, on my very first newspaper job, I discovered the South and hush puppies and Southern belles and okra and pickup trucks and fried catfish. I also discovered the works of a great Southern writer who explained it all to me: Lewis Grizzard.

“The only thing Southern in my hometown, New York City, was the South Bronx. The newspapers there didn't carry Grizzard's syndicated column. But reading him for the first time in the Atlanta Constitution made me laugh. Out loud. And when you move to a new region, you need to laugh. Get comfortable. Understand your surroundings.

“I never met Grizzard. He worked in the Constitution's eighth-floor newsroom; I was a college-intern reporter down on the sixth floor, at the old Atlanta Journal. But late one night, after a few beers left me feeling bold, I waited for the security guard to pass on his rounds, then sneaked into Grizzard's office.

“Didn't touch anything. Just stood and looked at this big, messy desk. Tried to absorb some of the energy in that room. Wondered how one writer could make so many people laugh.”

Now I don't have the space here to look at the wonderful ways in which he wrote, how his writer's eye saw things the rest of us didn't see, how he was, perhaps, the first politically incorrect columnist of our generation.

My only goal here for you, the columnist, is to remind you of him. He's not talked about anymore. And perhaps inspire you to go to eBay or Amazon and buy yourself a cheap, used collection of one of his many column collections.

He was the best. And although he's gone to Columnists' Heaven, the work he left behind is enough to inspire us to be great like he was.

Read some of Grizzard's columns here.