With comedy and warmth, Dave Lieber thanks entire state

He uses his comedy speaking abilities as a Certified Professional Speaker to — get this — thank an entire state for its fantastic hospitality more than 30 years ago.

Here's the headline from the state's top newspaper: 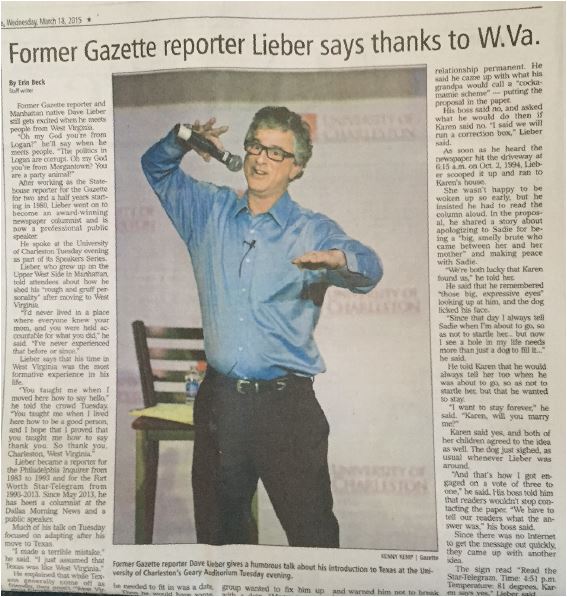 That's from the March 18, 2015 Charleston (W.Va.) Gazette newspaper, where funny comedy speaker Dave Lieber got his start as a young reporter more than 30 years ago.

His comedy talk was called: “How I Survived New York and West Virginia, But Texas Almost Killed Me!”

Former Gazette reporter Dave Lieber gives a humorous talk about his introduction to Texas at the University of Charleston’s Geary Auditorium Tuesday evening.

After working as the statehouse reporter for the Gazette for two and a half years starting in 1980, Lieber went on to become an award-winning newspaper columnist and is now a professional public speaker.

He spoke at the University of Charleston Tuesday evening as part of its Speakers Series.

Lieber, who grew up on the Upper West Side in Manhattan, told attendees about how he shed his “rough and gruff personality” after moving to West Virginia.

“I’d never lived in a place where everyone knew your mom, and you were held accountable for what you did,” he said. “I’ve never experienced that before or since.”

Lieber says that his time in West Virginia was the most formative experience in his life.

Lieber became a reporter for the Philadelphia Inquirer from 1983 to 1993 and for the Fort Worth Star-Telegram from 1993-2013. Since May 2013, he has been a columnist at the Dallas Morning News and a public speaker.

Much of his talk on Tuesday focused on adapting after his move to Texas.

“I made a terrible mistake,” he said. “I just assumed that Texas was like West Virginia.”

He explained that while Texans generally come off as friendly, they aren’t “West Virginia friendly.” They’re friendly “on the surface.”

Texans will generally ask a series of questions upon a first meeting, starting with “Boy, where you from?” he said.

The second question is “What church do you go to?”

“You never asked me that once!” he said to the crowd. Next they’d ask “What does your wife do?” and “Any kids?” They found out he was a liberal, divorced, childless, Jewish Yankee.

“At that point, they would give up, and they would walk away,” he said.

But as a writer, it was Lieber’s job to connect with readers through three columns a week. He struggled to find common ground with the people in his new town. He tried going to the library to read books about Texas. He pulled one off the shelf on the Alamo, a subject he didn’t learn about in school in New York.

“I couldn’t remember the Alamo,” he said. He also learned what it meant when a distinguished lady said “Bless your heart.”

“Well the book said they hate you,” he said.

He tried dressing the part, although the sales clerk didn’t take too kindly to him asking for a “cowboy costume.”

He also even tried signing up for a rodeo put on by a Baptist church. He made it on the bull for 9.6 seconds, but only because the bull froze for eight seconds. He remembers thinking “When I land, y’all are going to like me.”

But instead, readers of his column thought he made too big of a deal out of 1.6 seconds on a bull.

Eventually, Lieber became fixated on the idea that what he needed to fit in was a date.

Then he would have something in common with people to talk about. In his mind, she even gave him story ideas and edited his columns.

So, he decided to go about finding a woman in Texas style way, too. “They do it so much the Supreme Court told them they had to stop doing it in certain places,” he said. “You know what I’m talking about. Prayer.”

It took one week for the phone to ring. A local women’s club leader called and tried to flatter him into covering a fashion show.

“You’re not nearly as bad as everybody says you are,” she said. He said no, but she continued to play him.

“You’re not married, are you?” she asked. He said no, and asked how she knew. “She says because it’s obvious,” he said. “‘You never write about anything interesting.’”

The woman also told him the group wanted to fix him up with a date. “Many men are intimidated by her beauty,” she said.

Lieber remembers meeting Karen that night. He recalls her blinding smile, and his inability to do anything but stammer when meeting her. Somehow he managed to ask her for her phone number, and she gave it to him.

That first week, they talked on the phone for 20 hours.

“This is when a guy like me ruins it by going out,” Lieber said.

The night of their first kiss was “the greatest moment of my life,” he said. He knew he needed to meet her kids, so he went to her house that night. Her son immediately asked “Are you going to be my new daddy?”

Her daughter immediately took to calling him “little man” as she looked down at him, and warned him not to break her mother’s heart. Meanwhile, Karen’s dog Sadie glared with utter contempt. The dog had been abused by a previous owner, and was wary of men.

After six months, Lieber decided he needed to make the relationship permanent. He said he came up with what his grandpa would call a “cockamamie scheme” – putting the proposal in the paper.

His boss said no, and asked what he would do then if Karen said no. “I said we will run a correction box,” Lieber said.

She wasn’t happy to be woken up so early, but he insisted he had to read the column aloud. In the proposal, he shared a story about apologizing to Sadie for being a “big, smelly brute who came between her and her mother” and making peace with Sadie.

“We’re both lucky that Karen found us,” he told her.

He said that he remembered “those big, expressive eyes” looking up at him, and the dog licked his face.

“Since that day I always tell Sadie when I’m about to go, so as not to startle her… but now I see a hole in my life needs more than just a dog to fill it…” he said.

He told Karen that he would always tell her too when he was about to go, so as not to startle her, but that he wanted to stay.

Karen said yes, and both of her children agreed to the idea as well. The dog just sighed, as usual whenever Lieber was around.

“And that’s how I got engaged on a vote of three to one,” he said. His boss told him that readers wouldn’t stop contacting the paper. “We have to tell our readers what the answer was,” his boss said.

Since there was no Internet to get the message out quickly, they came up with another idea.

“That’s the moment that Texas began to feel warm and friendly like West Virginia,” Lieber said.