Could Ernie Pyle’s work fly today on the Internet?

A little disgusted is how I feel when I read these words from Time magazine book reviewer Lev Grossman about how writers are going to have to write differently for people who read their work on cell phones or who can't focus too long on one subject:

“You're going to want to have blood on the wall by the end of the second paragraph. And I think that's something writers are going to have to adapt to, and the challenge will be to use this powerfully narrative form, this pulpy kind of mode, to say important things.”

(Thanks to Lynn Neary of NPR.org for that quote, and for Jerry Simmons of www.WritersReaders.com for reprinting.)

But how much do we have to change our writing?

I'm hoping the answer is not all that much. Many newspaper columnists already try to write like that. Not blood on wall, necessarily, but some kind of question posed or mystery offered that makes the reader want to get to the third paragraph. And on and on. We call it the dramatic arch.

But how do you get to build an arch if your audience gives you less than a second to scan your story and decide if you are worth a few seconds more? The new reality for today’s writers.

I wonder how Ernie Pyle would have handled this dilemma. 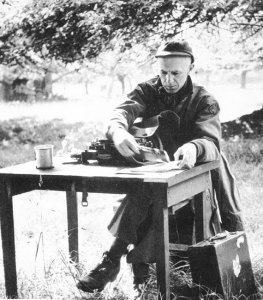 Ernie Pyle at war -- with a typewriter and a heart. He was most likely the best columnist of the 20th century.

April 18, 2010 marks the 15th anniversary of a proclamation by the National Society of Newspaper Columnists establishing the date as National Columnists Day. That's the day our patron saint, Ernie Pyle, was killed in a foxhole by a Japanese sniper.

As the young pup who helped then-NSNC President Bill Tammeus pick that date, it holds something special in my heart. Ernie was the greatest columnist of the 20th century, maybe ever.

But he didn't go for blood on the wall in the second graph.

My favorite Pyle column is not so well known. It was his public announcement of the death of his mother and the circumstances surrounding it. He didn't hammer it home by the second graph. As my National Columnists Day gift to you, here are excerpts:

One drear evening in London a friend and I started out to dinner. We had gone about two blocks when we heard hurrying footsteps behind us. We turned and saw that it was a little bellboy from my hotel. The lad’s name was Tom Donovan, and he was the one who had showed me my room on that first strange night months before when I arrived in London.

“This telegram just came for you, sir,” he said. “I thought maybe I could catch you.” I thanked him and he started on back.

I stepped over to the curb, out of people’s way, while I tore open the telegram and read it,

“What is it?” my friend asked. “More good news from home?”

“Read it,” I said, and went on ahead. When he caught up he said, “I’m sorry,” and we walked toward Leicester Square as though nothing had happened.

It was the cablegram that told me that my mother, far away in Indiana, had come to the end of her life.

That night in London, back in my room, it seemed to me that living is futile, and death the final indignity. I turned off the lights and pulled the blackout curtains and went to bed.

The pictures of my mother raced across the darkness before my eyes. Pictures of nearly a lifetime. Pictures of her at neighborhood square dances long, long ago, when she was young and I was a child. Pictures of her playing the violin. Pictures of her doctoring sick horses; of her carrying newborn lambs into the house on raw spring days. I could see her that far day in the past when she drove our first auto – all decorated and bespangled – in the Fourth of July parade. She was dressed up in frills and won first prize in the parade and was awfully proud….

I could see her as she stood on the front porch, crying bravely, on that morning in 1918 when I, being youthful, said a tearless good-by and climbed into the neighbor’s waiting buggy that was to take me out of her life.

The pictures grew older. Gradually, she became stooped, and toil-worn, and finally white and wracked with age – but always spirited, always sharp.

On the afternoon that I was leaving London I called little Tom Donovan, the bellboy, to my room. One by one the floor servants had come in, and I had given them farewell tips. But because I liked him, and more than anything else, I suppose, because he had shared with me the message of finality, I wanted to do something more for Tom than for the others. And so, in the gentlest way I could, I started to give him a pound note.

But a look of distress came into his face, and he blurted out, “Oh no, Mr. Pyle, I couldn’t.” And then he stood there so straight in his little English uniform and suddenly tears came in his eyes, and they rolled down his cheeks, and then he turned and ran through the door. I never saw him again.

On that first night I had felt in a sort of detached bitterness that, because my mother’s life was hard, it was also empty. But how wrong I was. For you need only have seen little Tom Donovan in faraway London, wretched at her passing, or the loneliness of Snooks [her little dog] after she had gone, or the great truckloads of flowers they say came from all over the continent, or the scores of Indiana youngsters who journeyed to her both in life and in death because they loved her, to know that she had given a full life. And received one, in return.

To me, this is perfect writing. Everything works. The man knew his readers, and he knew his heart.

Do you believe that writing can no longer be presented like that to readers?

Those universal truths about our audiences shouldn't change because of our audience's shortened attention span due to all the electronic toys that, for the time being, are more fun than we are.

If you enjoyed the above, please continue on and read this second Dave Lieber story about what he learned from Ernie Pyle’s bad marriage when he visited Ernie’s old house while on his honeymoon.