, a certified professional speaker, rode a bull in a rodeo (or two), interviewed the Imperial Wizard of the Ku Klux Klan, lived in a nudist colony for three days for a newspaper story and, once, helped solve a murder. The award-winning newspaper columnist doubles as a popular keynote speaker, coach and trainer whose programs delight dozens of audiences every year.

A self-described business storytelling strategist, he customizes his programs for your particular area in the business world. As one of America’s storytelling experts, he helps you understand how to use stories to build a higher profile, earn more sales and gain raving fans. Learn how to show and not tell. Turn bullet points and data into stories. See how emotion and passion brings out everyone’s heart.  He is super-funny and engaging! 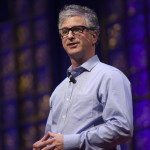 Dave works as The Watchdog investigative columnist for the highly-respected Dallas Morning News. His latest columns are available on The Dallas Morning News Watchdog page. He fights for Americans and shows them how to save time, money and aggravation. He works to expose corruption and uses stories to make positive change.

In 2019, he won top prize in the nation's largest column-writing contest sponsored by the National Society of Newspaper Columnists.

The contest judge noted: “Through a lively combination of consumer advocacy and investigative reporting, Lieber’s columns were models of suspenseful storytelling and public service.”

You can read his winning columns: 1) helping the widow of Officer J.D. Tippit, the Dallas police officer killed by Lee Harvey Oswald, get buried beside her late husband, and 2) helping a waitress who was harmed by an unscrupulous used car dealer. 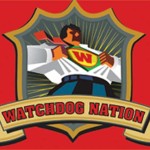 He is founder of a consumer rights movement —  WatchdogNation.com — which shows Americans how to protect themselves from thugs, thieves, scammers, and corporate skulduggery.

His heart is in the non-profit world. He’s co-founder of Summer Santa, one of North Texas’ largest children’s charities. For this, he won the Will Rogers Humanitarian Award. This honor goes to the U.S. newspaper columnist whose work produced positive effects on the lives of readers.

As a first-time playwright, Dave wrote AMON! The Ultimate Texan. It’s the story of “Mr. Fort Worth” — Amon Carter who owned the newspaper, radio station AND TV station — and ran the town for 50 years. Dave’s play debuted in 2019, was a smash hit and went on to perform 36 shows in six Texas cities. Learn more at AmonPlay.com. 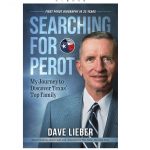 Dave followed up with his ninth book — SEARCHING FOR PEROT – My Journey to Discover Texas' Top Family — the first biography of Ross Perot Sr. in 25 years. Dave wrote a companion play called PEROT! American Patriot that is scheduled for its world premiere on Feb. 11, 2022. It will be produced by Theatre Coppell and open at the dazzling new $22 million Coppell Arts Center. You can buy the critically-acclaimed Perot book now at www.PerotBook.com. (192 pages, 60+ photos.) 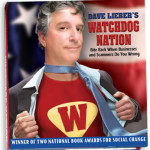 His book, Dave Lieber’s Watchdog Nation, is a ground-breaking how-to guide that teaches you tips, tools and strategies to bite back when businesses and scammers do you wrong. The book won two national book awards for social change and once was named one of the top 10 consumer books of the year. Read the funny introduction. 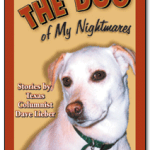 His popular paperback — The Dog of My Nightmares: Stories by Texas Columnist Dave Lieber — is now in its fifth printing. Readers love the nearly 100 stories on a variety of subjects. 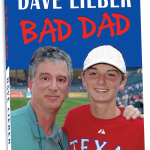 Dave’s book, Bad Dad, is a Texas thriller about the worst 10 minutes of his life. Read Chapter One here. Watch the video trailer here. 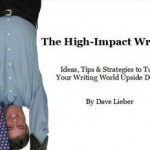 Ideas, Tips and Strategies to Turn Your Writing World Upside Down. Dive deep into Dave’s writing world as he shares his secrets. In this detailed and fun manual, Dave shows you advanced storytelling techniques, humor writing tips, investigative reporting secrets, interviewing techniques and, most important, how to develop new styles of creativity. All designed to make you a high-impact writer in your community. The information provided works wonders for presenters of any kind. 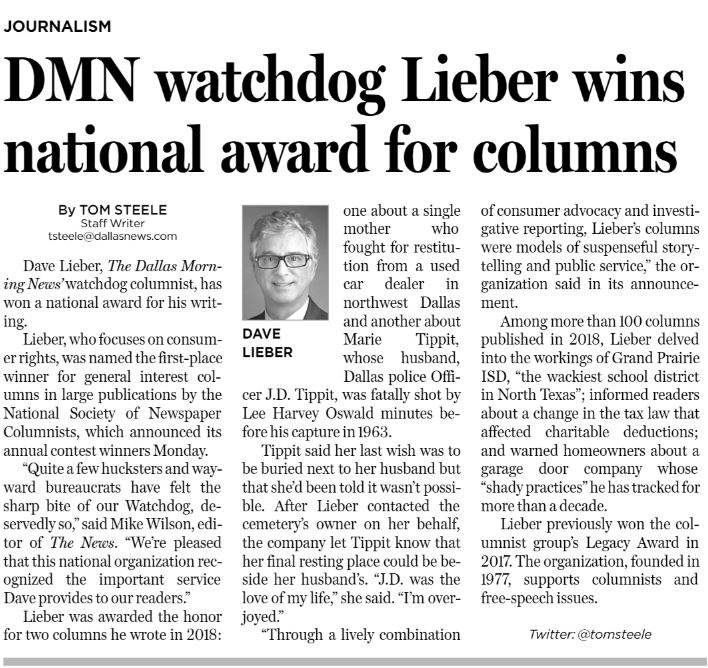