The following was Dave's favorite column about Sept. 11. It appeared on Sept. 14, 2001. The column is in Dave's popular book, The Dog of My Nightmares: Stories by Texas Columnist Dave Lieber

It is a simple, eloquent  106-word poem that sums up the thoughts of a nation.

Rachel Engelland, 9-year-old daughter of Shawn and Sandra Engelland of Keller, caused tears of sadness and pride in teachers and staff Wednesday at Shady Grove Elementary School when she took her assignment to write in her journal and created a work of art.

The teachers at Shady Grove had been careful Tuesday not to let the children learn too much about the terrorist attacks on America.

“We kept it as normal as possible,” Principal Jayne Flores said.

When Rachel’s mother picked her up as part of a carpool Tuesday, Rachel said, “Mommy, I heard that a couple of airplanes crashed into this building. Do you know anything about it?”

“We’ll talk about it later, not when I’m carpooling,” her mother answered. “I have to watch the traffic.”

Rachel was surprised to see her father home from work. Like many others, Shawn Engelland, a NASA aerospace engineer, was released from his job early.

“We need to talk to you about something,” he said when Rachel walked in. “This is really serious.”

The father and mother sat Rachel and her little sister, Rebekah, down in the living room and turned on the television.

He showed them the videotape of the hijacked airplanes crashing into the innocence of Americans.

The family said a prayer, and Rachel, who began to feel sad, went out for a bicycle ride.

“I decided I needed a break,” she said.

Tuesday night, she had difficulty sleeping.

She awoke Wednesday morning and her first thought was, “Whoa, it really happened!”

She dressed in tan overalls and a rose-colored shirt and headed off to school, where she watched as the flag was lowered to half-staff.

In Rachel’s class, her teacher, Paula Brownlee, talked about patriotism. The students stood and sang the national anthem. Then Brownlee asked the students to write in their journals.

Rachel wrote a poem which she titled, It All Came at Such a Cost.

Yes, a lot of lives were lost,

It all came at such a cost.

There wasn’t anything one could do,

But I hope you know I’m praying for you.

Yes, those lost were loved the most.

But if we hold hands from coast to coast,

We’ll lift each other up so high.

All the nations will see how we behave.

We’re the land of the free and the home of the brave!

The World Trade Center is gone, lives are lost.

It all came at such a cost.

When she was done, she read the poem aloud in class. Her teacher cried. Her classmates applauded. Then other teachers who were shown the poem cried, too.

“I wrote it to comfort people,” the little girl said.

Please share it with your friends and loved ones.

Tell them that among some of the wisest people in our great land is a little girl from Keller, Texas, who wrote so eloquently what so many of us feel and what we all need to hear.

This is one of the nearly 100 great stories in Dave Lieber's The Dog of My Nightmares. You can get a paperback copy of the 4th edition at the Yankee Cowboy Store. 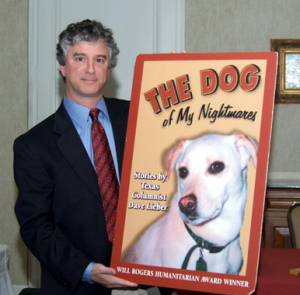 Dave Lieber, The Watchdog columnist for The Fort Worth Star-Telegram, is the founder of Watchdog Nation. The new 2010 edition of his book, Dave Lieber’s Watchdog Nation: Bite Back When Businesses and Scammers Do You Wrong, is out. Revised and expanded, the book won two national book awards in 2009 for social change. Twitter @DaveLieber