Molly Ivins is back, this time in a new book that reminds us of her brilliance

We’ll never know. But for sure, Ivins, who died in 2007 after a long career as a columnist, would be having a field day. She specialized in politicians who act nuts. She couldn’t keep up with today’s events.

Or, actually, if anyone could, she could.

We do have clues, though. A bright new pocket book collection of her funniest and most insightful quotes has been published by Great Texas Line Press, the leading pocket book publisher of all things Texas.

Molly Ivins: She DID Say That by Allison Engel and Margaret Engel is billed by its publisher as “the perfect pandemic diversion.” Which it is. 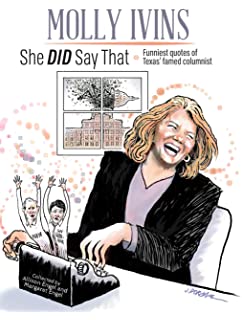 The Engel sisters, journalists and playwrights, are the authors of the hit play Red Hot Patriot: The Kick-Ass Wit of Molly Ivins, which featured Kathleen Turner. After their long research into Molly’s life, the sisters sat on a treasure trove of Molly quotes.

“She was as a maverick, a genuine Texan, who lived out loud,” they write in the introduction. “Her moral compass was strong – this was a woman who greeted Ku Klux Klansmen rallying on the Texas Capitol grounds by mooning them.”

What this book does, aside from entertaining and inducing laughter, is remind us again of her writerly brilliance.

Two of my favorite quotes are in the book, which I often quote to others:

And on popularity in the newspaper bid-ness: “Any publisher that has more than three cars in his funeral procession is a failure.”

There’s so much more. No matter your politics, if you love great writing, biting wit, powerful ideas and lots of laughter, this is a book that you’ll truly adore.

The book is only $5.99, and you can order copies at GreatTexasLine.com.